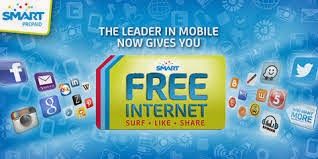 A bit of good news as we ring in the new year: Smart Communications has announced that it’s extending its Free Mobile Internet offer for all Smart, Talk ‘N Text, and Sun Cellular subscribers.

The promo is supposed to end today, January 5, but the extension of one month means you can still consumer 30MB of data every day without being charged till February 5, 2015.

"The positive response to the Smart Free Internet promo gave us a very strong indication of Filipinos’ propensity for mobile data use," according to Charles A. Lim, head of wireless consumer business at Smart Communications and Sun Cellular.

He added: “This is why we continue providing our subscribers—many of whom already have the mobile devices capable of accessing the Internet but have yet to use them to go online—the opportunity to experience the Internet.”

Smart’s Free Internet promo, which features free Facebook access even after the 30MB of data allotted for users is consumed, is part of the telco’s goal to push “Internet for all.” It was first offered to prepaid subscribers on September 26, 2014, but was expanded on October 3 to include those with postpaid plans.
Share: