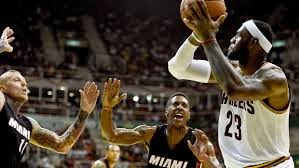 The NBA got what it came to Rio de Janeiro for: a marquee preseason game, superstars like LeBron James and Dwayne Wade on show, and the flavor of the beachfront city that will host the Olympic Games in two years.
Saturday's game didn't count with both teams just a few weeks into preseason practice. It was the first time James faced his former team the Miami Heat after leaving over the summer to return to the Cleveland Cavaliers.
Cleveland defeated Miami 122-119 in overtime, improving the Cavaliers to 2-0 in the preseason and dropping Miami to 0-3. Kevin Love had 25 points to lead the Cavs. Chris Bosh led Miami with 19. James finished with 7 points, playing only 20 minutes.
Miami trailed by 20 points, but rallied against the Cavs reserves to tie it 105-105 and force overtime. Cleveland stretched the lead to 122-119 on two free throws by Joe Harris with 13 seconds left. Miami's Shabazz Napier missed two 3-point attempts in the final seconds.
The HSBC Arena, which will be used for gymnastics during the Olympics, was a 15,411 sellout with the top ticket advertised at $350 with green and yellow Brazilian flags adding to the color.
"Who knows where this league will be 20, 25 years from now," Heat coach Erik Spoelstra said. "In the last six years since I've been the head coach we've been to England, France, China and Rio with tremendous experiences. Whether or not that happens on a regular basis — in the regular season — I don't know."
Wade is also a booster of the NBA's global profile.
"The NBA has done an unbelievable job of growing the game — the players as well — of making this game global," Wade said. We all benefit from it."
On the Brazil stage it was the Cavaliers' 32-year-old Brazilian center Anderson Varejao who got the loudest applause, upstaging James when the teams were introduced. Varejao left Brazil at 19 to begin playing abroad.
"I've been waiting my entire life for this," Varejao said from an on-court microphone. "I hope you enjoy it."
They did.
James missed the first shot of the game, a fall-away jumper from the left wing. Moments later Varejao scored the first points of the game on the Cavs' second trip down the floor, finishing the first quarter with 8 points as the Cavs led 27-21.
James shook hands with the Heat starters at the tipoff, but made little eye contact. James said in practices in Rio there was no bad blood, which was confirmed by former teammate Dwayne Wade and Chris Bosh.
"He's on another team," Bosh said Friday of James. "I think he'd understand that. I understand that. We'll have plenty of time to talk in the summer, and that's how it is now."
James was poor in the first half and played little after that, but his new team carried him — led by Varejao and Love, another new addition to the Cavs.
James made only 1 of his first 6 field-goal attempts, missed his only 3-point attempt and missed his first three free throws. He finished with 7 points.
According to a report this week by Forbes, James overtook Tiger Woods as the most marketable athlete in the world.
The real tension between the Heat and Cavs comes on Dec. 25 when the teams meet for the first time in the regular season.
The Cavs played without guard Kyrie Irving, who sprained his right ankle before the team left the United States.
Share:
Newer Post Older Post