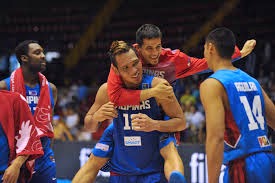 Gilas Pilipinas needed Andray Blatche to carry them in their first four games. In their last game of the 2014 FIBA Basketball World Cup found a way to win without him as they defeated Senegal, 81-79, to allow the Filipinos to head home with a smile on their faces.

Jimmy Alapag, playing his last game for the Philippines in international competitions, nailed crucial free throws in overtime to carry Gilas after Blatche fouled out of the game in overtime.

Blatche and Alapag led Gilas with 18 points each while June Mar Fajardo added 15 pointsto finally give the Philippines a much-deserved victory.

After the game, Gilas head coach Chot Reyes pounded his chest as he faced the Philippine crowd with tears welling in his eyes.

The opening minutes started very slow with both teams only scoring four points each in the first four minutes.

Gilas built an 11-7 lead but Senegal went on a 4-0 run to tie the game. Gabe Norwood then scored his first basket with a jumper but Senegal took the lead 16-13 capped by an alley-oop dunk from Hamady Ndiaye.

LA Tenorio then fouled Gorgui Dieng while taking a three to allow Senegal to lead 19-13 at the end of the first quarter.

Blood was spilled to start the second quarter as Ranidel De Ocampo bumped heads with Dieng. De Ocampo had to walk back to the locker room as he suffered a cut on his forehead.

Blatche scored five straight points to cut Senegal’s lead down to one at 22-21. Paul Lee then made back-to-back triples to extend the Gilas run to 11-0 for a 27-22 advantage with 5:06 left in the first half.

Coming off the timeout, Jimmy Alapag scored the first basket of his final game for the Philippines with a pull-up three in transition.

Blatche stepped out of the game late in the second period, but Gilas completed a 22-3 run in the second to erect a 35-22 lead as June Mar Fajardo anchored the team.

Japeth Aguilar finally got the highlight the entire Philippines was waiting for as he scored on a two-handed dunk to give Gilas a 41-26 lead with eight minutes left in the third.

Senegal trimmed their deficit down to nine points at 44-35 at the 4:29 with Blatche stepping out of the game again. Fajardo finally stopped the bleeding with two free throws followed by a bank shot from Jeff Chan but Senegal went on a 9-0 counter run to cut their deficit down to eight at 48-44.

Blatche halted the Senegal run with a free throw for a 49-44 Gilas lead heading into the fourth quarter.

Alapag started the last quarter of his international career perfectly with a four-point play and 53-44 lead for the Philippines. However, Senegal went on a 6-0 run to cut this lead so three points. Alapag bailed out Gilas again with another long-range bomb followed by a Fajardo basket for a 58-50 lead.

Gilas then flirted with disaster as Blatche committed his fourth foul to allow Senegal to cut the Gilas lead down to two, 58-56.

Lee was then called for a questionable flagrant foul but Dieng only managed a split from the free throw.

Filipino fans must have felt they were watching the same horror story again as Senegal went on a 4-0 run capped by a fast break layup from Mouhammad Faye off a Jeff Chan turnover. They grabbed a 61-60 lead at the 2:30 mark of the fourth.

The Gilas bigs then played a perfect high-low play as Blatche assisted Fajardo for a two-handed dunk. Blatche then added an inside two off a broken play to give Gilas a 64-61 with 1:23 left in their 2014 FIBA Basketball World Cup.

Gilas however gave up three triple attempts to Senegal as they allowed multiple offensive rebounds. Maleye Ndoye finally found the bottom of the net with a triple to tie the score at 64-all with 33 seconds left.

Tenorio missed a floater at the buzzer to force overtime.

With Gilas down by a single point in overtime, a Senegalese defender slid under Alapag on a fast break play for a flagrant foul but the Gilas captain only managed a split from the line. Blatche added a slam as Philippines kept possession.

Senegal then tied it up again at 69-all.

Blatche committed his fifth foul of the game with 1:55 left in overtime. Point guard Xane Dalmeida then gave Senegal a two-point advantage with free throws.

De Ocampo and Fajardo then showed off their version of a high-low play leading to another Fajardo basket. With 1:14  left De Ocampo was fouled on a rebound play and he calmly sank both free throws for a 73-71 lead.

Senegal then fouled Fajardo in another rebound play and the Kraken extended the Gilas lead to four points with 55 seconds. Dieng forced up a triple and Gilas grabbed the rebound. Alapag made two free throws but Senegal responded with a triple.

With 22 seconds left on the clock, Alapag split his free throws for a 78-74 count for Gilas. Another Senegal miss led to a splits by Norwood for a 79-74 Gilas lead with 11 seconds left. A dunk by Ndiaye cut it to 79-76 and fittingly, Alapag capped his international career with the game-clinching free throws.