Paul Lee Will Continue Playing With Rain or Shine 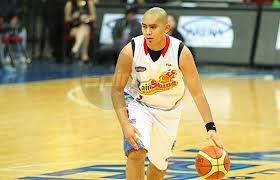 Former Rookie of the Year winner Paul Lee will stay with Rain or Shine.
Hounded by bad publicity after asking the ROS management that he will be traded to another team, the mercurial point guard had a chance of heart, saying he will continue playing for the team he helped become a consistent title contenders the past two years.
Sources disclosed yesterday that the 6-foot-1 Lee actually already made a decision last week but has kept mum on the issue since – at that time – he was still focused with Gilas Pilipinas in the FIBA World Cup in Seville, Spain.
“He’ll stay with ROS,” said a source, who requested not to be named as Lee has to formally make an official announcement.
Another person who has knowledge with Lee’s decision said that it was last week when he made up his mind after consulting some confidants particularly those who are close to him even while he was in Spain.
Lee arrived last Saturday with several other players, including his Rain or Shine teammates Jeff Chan and Beau Belga.
After Gilas scored an 81-79 overtime win over Senegal, the country’s first in 40 years in the tournament, Lee reportedly said that he will visit Rain or Shine’s practice session once he returns home.
Lee was also quoted that he also wants to have a ‘heart-to-heart’ talk with ROS mentor Yeng Guiao, whom he considers like a father.
Asked to comment on Lee’s change of heart, Guiao was happy although he wants to hear it personally from his prized guard.
“One of the reasons why he treats me like a father is because he knows that I’m actually concerned about his welfare. This is not for me, this is for him, for his own good,” said Guiao.
Through his manager, former UE Coach Lawrence Chongson, Lee announced his desire to be traded to another team at the end of his three-year contract with ROS, which expired last Aug. 31.
Lee made the request despite Rain or Shine’s offer of a new maximum three-year deal worth P15.1 million.
In previous interviews, Guiao has said that it is not in the character of Lee to ask for something like that, adding that there night be people manipulating the prized guard from Tondo, Manila.
Share:
Newer Post Older Post