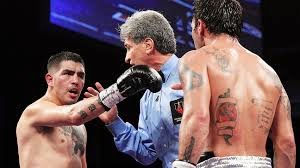 LAS VEGAS – No one would ever dare call what happened in the ring Saturday at The Cosmopolitan the sweet science. John Douglas, the Marquess of Queensbury who wrote what became the modern rules of boxing, would have blanched at the sight.
And the night ended with Bob Bennett, the executive director of the Nevada Athletic Commission, turning to promoter Osvaldo Rivero and saying, "I never said a thing about your sister."
It was a wild night that ended with Brandon Rios getting a ninth-round disqualification victory and a trip to the hospital to be checked for a potential corneal abrasion, a shoulder injury and dizziness.
"He kept sticking his glove right into my eye," an irritated Rios shouted to a reporter shortly after the end of the fight.
Diego Chaves had points deducted in the third and seventh rounds of the 10-round welterweight fight and then was disqualified by referee Vic Drakulich in the ninth for throwing an elbow to the face.
Rios had a point deducted from his score in the fifth. At the post-fight news conference, Chaves said Rios kept hitting him in the middle of the back, which is a foul, and pulled up his shirt to show a series of welts and bruises.
"What was I supposed to do?" said an exasperated Chaves, who was leading by a point on two of the three judges' scorecards and trailing by a point on the other at the time of the disqualification.
When they concentrated on fighting, it was an excellent fight. Chaves was scoring very well when he stayed outside and used his speed to beat Rios to the punch. He snapped Rios' head back several times with a speedy right hand behind a jab, though it never seemed to bother Rios all that much.
Rios relentlessly stalked forward and was throwing the harder punches, landing several wicked body shots.
But Drakulich appeared to be overmatched and quickly lost control of the fight. Admittedly, it was an extraordinarily difficult fight to officiate with all the elbows, head butts, holding, slams and other fouls that occurred.
Drakulich, though, didn't seem to understand how to stop it and was unable to get the fighters to listen to him.
Bennett and Francisco Aguilar, the chairman of the commission, deserve an extraordinary amount of credit for attending the post-fight news conference and answering questions about the fight and Drakulich's performance.
Aguilar said Drakulich would meet with Bennett in the commission office on Monday to review the fight.
"Vic early on tried to set a standard in that fight between these two fighters," Aguilar said. "This was not a boxing match; this was a brawl. They were there to brawl. Vic tried to take control of that fight by deducting the points, whether or not you agree that point was appropriate. He was trying to get control and as the fight went on, he was losing that control.
"I don't think either corner had respect for the authority in that ring. That is my concern. When he went in there to lay down the law, they were not listening. That fight was disintegrating to a point where it could become dangerous."
Bennett said he talked with all of the referees working Saturday's card about taking charge but not deciding the outcome. In a fight between Bryant Jennings and Mike Perez in New York a week earlier, a point taken from Perez by referee Harvey Dock in the final round determined the outcome.
But Bennett said Drakulich had no choice but to end the fight after Chaves elbowed Rios in the face at 1:26 of the ninth.
"If it's an egregious, intentional foul, you're able to take two points as one of your options," Bennett said. "The second option is that you can be DQ'd automatically for an intentional, egregious foul. Vic, I thought, provided a great deal of patience and attempted to control that fight.
"But as chairman Aguilar said, it was more of a rumble than a fight."
As Bennett was explaining himself, Rivero asked him a question in Spanish. Rivero's daughter, Natalia Rivero, translated it to English.
Just as Bennett was answering, someone at the dais made a joke and the media laughed out loud. That prompted Rivero's son, Sebastian, who was working Chaves' corner, to complain, asking why Bennett made a smart remark about his sister.
It was a misunderstanding, but Bennett turned toward Osvaldo Rivero and said, "Sir, I never said a thing about your sister."
It was that kind of a night. It was the type of fight that should have gone down as a classic, but that devolved into any ugly alley fight that no one was happy with.
Promoter Bob Arum said there would be no rematch and said he would talk about having Rios face either Mike Alvarado for a third time, Ruslan Provodnikov or Timothy Bradley in his next fight.
Rios, as he left ringside, upset about the fouls, concerned about his eye and overall health, wasn't happy.
"I didn't want to win that way," he said, angrily. "I never wanted to win like that."
And no one wanted to see it. But it turned into a pro wrestling match and there was a boxing referee in the ring.
So, the wild brawl turned out to be inevitable.
Share:
Newer Post Older Post