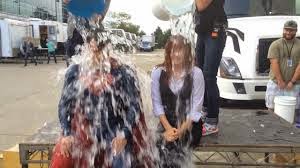 The lead stars of "Man of Steel" Henry Cavill and Amy Adams are the latest string of celebrities taking on the ALS Ice Bucket Challenge on the set of the sequel, "Batman V Superman: Dawn of Justice" while wearing their respective characters' costume.
According to The Wrap, during the challenge, Adams who was previously nominated by her fiancé Darren Le Gallo to do the Ice Bucket Challenge nominated six of her siblings to take on the ALS Ice Bucket Challenge.
In the meantime, Cavill sat there stoically and calmly as bucket after buckets of ice cold water were poured onto him while Adams was poured with only one bucket of ice water.
Cavill is by far the celebrity that has endured the most amount of icy water for the ALS Ice Bucket Challenge with a total of five big buckets drenching him, proving that he is indeed a 'man of steel'.
Adams and Cavill are the latest stars to join the ALS fundraising campaign that helps raising awareness for ALS also known as Lou Gehrig's disease.
"Batman V Superman: Dawn of Justice" will be released in cinemas in Malaysia on 25 March 2016 and in Singapore on 5 May 2016.
The film is directed by Zack Snyder, starring Ben Affleck, Gal Gadot, Laurence Fishburne, Diane Lane, Jesse Eisenberg, Jeremy Irons, Tao Okamoto, Holly Hunter, and Scoot McNairy.