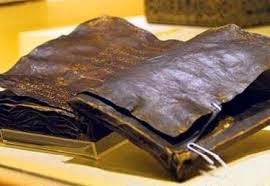 This discovery turns modern Christianity on its head! This bible, dating as far back as 2,000 years, details the Gospel of Barnabas, a disciple of Jesus Christ, which shows that Jesus wasn’t actually crucified and doesn’t claim him to be the son of God, but instead a prophet. The book charges that Apostle Paul was “The Impostor.” The story is completely different. In the Book of Barnabas, Jesus wasn’t crucified, but ascended to heaven alive, and Judas Iscariot was crucified instead.
The National Turk issued a report saying that the bible was seized from smugglers is a Mediterranean operation. The report states the gang was charged with smuggling a variety of things, such as antiques, illegal excavations and even explosives. The book is valued at around $28 million. That’s quite the find!
Experts and Authorities in Tehran insist that the book is authentic. It’s written in gold lettering on loosely tied leather in Aramaic, the language of Christ.
There are connections that can be drawn between this text and Islam, and it directly contradicts the New Testament’s teaching. In it, Jesus also predicts the birth of Prophet Muhammed, who founded Islam 700 years later.
Experts believe that during the Council of Nicea, the Catholic Church went through and hand picked the gospels that form what we know the bible to be today and omitted the Gospel of Barnabas (among others) in favor of Matthew, Mark, Luke and John. These original texts surfaced over time, and this new discovery is especially worrying to the Catholic church.
So what does this mean for religions derived of Christianity? It’s a bit of a predicament. The Vatican has asked Turkish authorities to allow them access to the book for examination. The big question is: will they accept it as evidence, deny its validity, or call it a “Muslim lie” as “Truth” Magazine did in 2000?
To many people, this book is seen as a cause for hope. But what does this mean for atheists? Is it a real text or a hoax? And does it even really matter? With any luck, this newly discovered text will force theologians to ask deeper questions about their faiths instead of believing it without thinking. Only time will tell. In the meantime, keep an open mind, be respectful of the beliefs of others, and remember that it’s our responsibility to take care of one another and this place we call home.