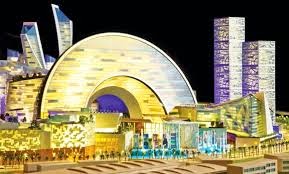 Dubai is launching a project to build an entertainment and hotel district that will include the world's largest shopping mall, the emirate's ruler, Sheikh Mohammed bin Rashid al-Maktoum, said on Saturday.
Plans for the "Mall of the World" project were originally revealed 18 months ago, helping to trigger a strong rally in Dubai's real estate and stock markets.
Saturday's announcement appeared to indicate that substantial work on the project would now begin, though the statement did not say when construction would be completed, how much it would cost or how it would be financed.
“The project will be built in phases in alignment with the gradual growth of family tourism in Dubai,” said Mohammed Abdullah al-Gergawi, chairman of Dubai Holding [DUBAH.UL], which is Sheikh Mohammed's personal investment vehicle and will develop the project.
The latest version of the plans includes construction of an 8 million square foot (743,000 square metre) mall, connected to a theme park, theatres, medical tourism facilities and 100 hotels and serviced apartment buildings with 20,000 rooms.
The complex would be able to host 180 million visitors annually. Seven kilometres (4.4 miles) of promenades connecting the facilities would be opened to the air during the winter but covered and air-conditioned during the hot Gulf summer.
Dubai is still recovering from its 2009 debt crisis and the International Monetary Fund has warned a slew of new real estate projects could lead to another boom-bust cycle. But officials say they are able to handle the risks, and a strong economy is helping Dubai's government-linked firms restructure their debt.
Share:
Newer Post Older Post