The Power Of Typhoon Glenda 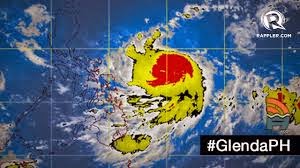 The powerful winds of Glenda (international name: Rammasun, which in Thai means “God of Thunder”) brought down trees, electric posts and ripped off roofs across Metro Manila, where government offices, schools and the stock market were shuttered for the day.
Without electricity, the elevated commuter train services LRT and MRT were suspended and most of the city of 12 million people sweltered in the dark for more than half of the day.
The eye of Glenda passed to just south of Metro Manila at wind speeds of up to 120 kilometers per hour and with gusts of up to 165 kph.
In 2006, Typhoon “Milenyo” (Xangsane) hit the capital at 130 kph, with gusts of up to 160 kph. The most powerful storm to hit land in recorded history, Super Typhoon “Yolanda” (Haiyan) struck Eastern Visayas on November 8, 2013 with sustained winds of 235 kph and gusts of up to 275 kph.
Glenda leaves the Philippine area of responsibility Thursday.
Two deaths were reported in Metro Manila as of midafternoon Wednesday.
At a meeting of the Metropolitan Manila Development Authority and Disaster Risk Reduction and Management Council, representatives reported that one person was killed in Pasig City and another died in Valenzuela City at the height of the typhoon.
Jomarck Diaz, 19, was lowering the national flag in Barangay (village) Palatiw Hall in Pasig when he was hit by falling hollow blocks. Jackilyn Sumampong, 27, died after the wall of an abandoned factory collapsed on her house in Barangay Canumay East, Valenzuela City. Five other people were injured in the incident.
Pateros reported two typhoon-related injuries; Quezon City, two, one of whom was in critical condition; and Makati, one, a man who was hit by flying debris as he drove a motorcycle.
The Office of Civil Defense-National Capital Region released a report that showed 3,602 families, or 16,127 people, were evacuated in Navotas, Pasay, Pasig, Parañaque, Mandaluyong, Quezon City, Muntinlupa, Manila and Taguig.


The MMDA said the evacuees were staying in at least 27 school buildings in the metropolis.
‘Boring’
Defense Secretary Voltaire Gazmin and other Cabinet officials conducted an aerial survey of the metropolis and surrounding provinces Wednesday afternoon.
For his part, Public Works Secretary Rogelio Singson said he found the survey “boring,” as he did not see flooding on major roads. Singson reported “minimal flooding” in major roads in Metro Manila, including flood-prone parts like Magallanes, Lagusnilad and España Avenue, and even in low-lying areas like Malabon and Navotas. He was satisfied that Maricaban Creek did not overflow and cause flooding in Makati City and Pasay City. He said even the coastal towns in Cavite province did not experience flooding.
Singson said fallen trees and electric posts or landslides closed segments of three national roads in Bataan, Aurora and Pampanga; four national roads and a city bridge in Batangas; and two segments of national roads in Mindoro and Marinduque.
But national roads in Albay and Sorsogon had been cleared, as well as national roads in Eastern Visayas, he said.
He said roads were being cleared in the provinces of Zambales and Bataan, both landslide-prone areas.
Communications Secretary Herminio Coloma reported “minimal infrastructure damage and casualties” from Glenda.
More than 150,000 people were evacuated to higher grounds in coastal villages before the typhoon hit land, saving many lives.
Haunted by Super Typhoon Yolanda, which killed thousands, the residents of towns and villages in Glenda’s path cooperated with the authorities and were saved from death and injury.
Share:
Newer Post Older Post