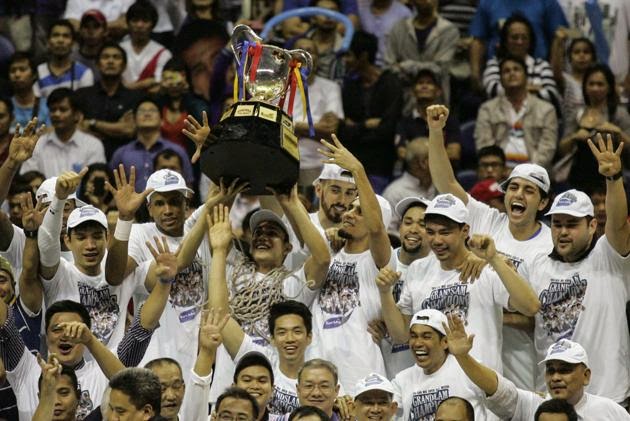 The San Mig Super Coffee Mixers etched their name into the history books as they defeated the Rain or Shine Elasto Painters 92-89 in Game 5 of the 2014 PBA Governors’ Cup Finals.

James Yap exploded for 29 points in the game to carry the Mixers to an exciting victory. Yap's 29-point was his best in all of the Mixers' 22 Finals games in their four-championship run.
With the game on the line, Yap missed two free throws that could have given them a five point lead. Luckily for the Mixers, Jeff Chan and Paul Lee missed game tying attempts.

After the Mixers got the rebound, Mark Barroca stepped up to the line but he also missed two freebies to give Rain or Shine one last shot at forcing overtime. However, Arizona Reid missed a three-point attempt at the buzzer.

The Mixers started the first quarter wanting to establish distance between them and the Painters. Powered by a combined 15 points from Marqus Blakely and James Yap, San Mig held a 23-16 lead after the first quarter.

Momentum turned for the Painters after the San Mig Super Coffee ball boy was called for a technical for contesting an out of bounds call. Jeff Chan hit the technical free throw and Raymond Almazan followed up with a slam dunk to cut the Mixers’ lead down to four points. Mark Barroca responded with a baseline floater but Gabe Norwood hit a three for a 27-25 count in favor of San Mig.

PJ Simon put together five straight points to keep the Mixers ahead but a Pael Lee triple knotted the game at 32-all.

James Yap then took over as he made a couple of one-handers and added a triple at the 1:45 mark for a 41-36 San Mig lead.

The two teams exchanged baskets for a 43-38 count at the half.

The first 24 minutes featured a head-to-head battle between two of the PBA’s most potent scorers. Yap led all scorers with 14 points while Lee had 13 including a picture perfect three after crossing Pingris over.

The Mixers dominated the rebounding department 29-18 but they allowed the Painters to stay close as they committed 15 turnovers against only three for the Painters.

The Mixers threatened to pull away in the third quarter as they built a 16-point lead. They were at the verge of breaking the game wide open but as usual, the Painters went to work as they scored on repetitive putbacks to slice.

Rain or Shine got to within a single point after their initial attack in the last quarter of the PBA season but Yap drilled a three to keep the Mixers’ heads above water.
The Main Man: James Yap scored 29 points including nine crucial ones in the fourth quarter to do the heavy lifting for the Mixers. He also shot an outstanding 12 of 18 from the field.

Honorable Mention: Blakely chose the best time to play his best game against the Best Import of the Conference. Overshadowed in all of the four earlier games by Reid, Blakely scored 21 points, grabbed 16 rebounds, dished out eight assists, and swatted three shots in 42 minutes on the floor.

Game Turning Point: It was not over until the final buzzer. With 4.4 seconds left in the game, Barroca took 1.8 seconds off the clock by tapping out an inbound pass. The Mixers forced Reid to a difficult three point shot that hit the front of the rim before they exploded in celebration.

San Mig Super Coffee head coach Tim Cone: I already got hit with water but winning the grand slam has not hit me yet. I’m just amazed at what the guys have accomplished because this was a really tough season. We only took two days off in a long span