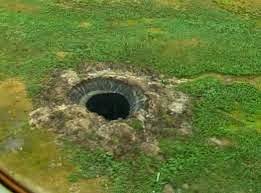 
Two new mysterious holes have appeared in the Siberian permafrost, the Siberian Times reports—just two weeks after the first crater appeared in the northern Yamal peninsula.
The second hole, some 15 meters wide, was found a few hundred kilometers away from the first, also in the Yamal peninsula. Like the first, the second hole has piles of dirt surrounding the perimeter, indicating an excavation or explosion. However, scientists have yet to confirm what’s causing the strange phenomena. Some believe they’re a result of meteorite impacts, while others look towards natural gas explosions under earth’s surface.

Mikhail Lapsui, a deputy of the regional parliament, inspected the second hole, reports the Siberian Times, while also gathering information from locals.
“According to local residents, the hole formed on 27 September 2013,” Lapsui told the Times. “Observers give several versions. According to the first, initially at the place was smoking, and then there was a bright flash. In the second version, a celestial body fell there.”
Reindeer herders stumbled upon the third crater alongside a pasture trail in the Taymyr peninsula to the east of Yamal. Scientists estimate that hole to be 60 to 100 meters deep with a diameter of 4 meters.
The two new holes will undergo investigations. The first hole—70 meters deep—revealed an ice-covered lake at the bottom.
Share:
Newer Post Older Post