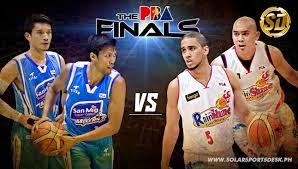 San Mig Super Coffee head coach Tim Cone never told his players they were going for a grand slam. They never talked about it. They never discussed it. But with three wins to go, how can a team not peek at the possibility? How could a team not yearn for the taste of making history.
The Mixers defeated the Talk ‘N Text Tropang Texters 93-87, Friday night at the Smart-Araneta Coliseum to keep their hopes for a grand slam and a fourth straight title alive.
San Mig Super Coffee does not need the grand slam to establish the fact that they are the best team in the PBA today. Three straight championships already prove that the Mixers are a new dynasty in the PBA. What’s amazing in this run is that  the PBA is loaded with strong teams today.
Just when they needed him most, James Yap played his biggest game yet again as he scored 25 points.
Joe Devance was brilliant all game long as he notched his career’s first triple double 11 points, 11 rebounds, and 10 assists.
Marqus Blakely and Marc Pingris again showed why they are the most feared front court combo in the league as they tag-teamed for 31 points and 26 rebounds.

Mark Barroca displayed again that he is one of the very best closers in the PBA with an outstanding showing in the fourth quarter in the Mixers’ most important game in the 2014 PBA Governors’ Cup.
Three wins to go. Three wins before history.
The San Mig Super Coffee Mixers are so close they could already taste it. But as proven in the past quests for the grand slam, those final steps are the hardest in the journey.