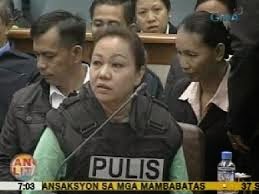 A lawyer of businesswoman Janet Lim Napoles yesterday said his client is willing to return P2 billion of what she earned from the P10-billion pork barrel scam to the government.
It was not immediately known whether this is one of the conditions set for Napoles, the alleged pork barrel scam mastermind, to be admitted to the government Witness Protection Program (WPP). But this new twist developed as immunity talks between Napoles, and the Department of Justice (DOJ) are now underway.
Lawyer Stephen David, one of Napoles’ lawyers, said his client is willing to give back what she reaped from the multi-billion-peso racket involving the Priority Development Assistance Fund (PDAF) or pork barrel funds of lawmakers, which she started during the Arroyo administration.
Based on their calculations, David claimed that Napoles only gained P2 billion from the scam even though news reports said that P10 billion worth of PDAF was lost to the bogus non-government organizations (NGOs) of Napoles.
“Dapat talagang ibalik iyon. Willing naman si Mrs. Napoles na ibalik iyon,” David said.
He also noted that while his client is willing to return the amount, Napoles would not be able to pay in cash as her assets are currently frozen. “Wala siyang pera,” he said.
But the lawyer of whistleblower Benhur Luy, Atty. Reji Mendoza, belied David’s claim, saying Napoles has other assets that have yet to be frozen.

CONFIDENTIAL MEETING
As this developed, two sources, who refused to be named due to the sensitivity of the matter, confirmed to the Manila Bulletin that a confidential meeting among DOJ representatives, the National Bureau of Investigation (NBI), David, and Mendoza was held last Monday.
The meeting, according to the two unimpeachable sources, focused on the supposed documents that would corroborate the affidavit that Napoles submitted to the DOJ and the Office of the Ombudsman.
The documents included the vouchers, which will prove the involvement of lawmakers and officials she has implicated in the pork barrel scam.
But aside from the documents, the sources said that the lawyer of Napoles was pushing for the inclusion of the businesswoman in the WPP of the DOJ.
Aside from returning the money, which she allegedly earned from the racket, the sources mentioned the request of Napoles to spare her children, which are likely to be indicted for graft, from criminal prosecution.
“Isn’t it obvious? The willingness of Napoles to return the P2 billion is an indication that she [Napoles] is trying to enter the WPP program,” one of the sources said.
In a text message, lawyer Bruce Rivera, another Napoles lawyer, confirmed the meeting of the DOJ, NBI, David, and Mendoza but he declined to reveal what the parties talked about.
“Confidential ang pinag-usapan nila as per Atty. David,” he said.

MOST GUILTY
Sought for comment, Mendoza reiterated his opposition to proposals to include Napoles in the WPP of the DOJ, saying she’s was the most guilty among those who were implicated in the scam.
Mendoza maintains that Napoles should not be granted immunity due to her questionable credibility, which he said was a natural liability.
He noted how Napoles had lied “many times,” citing her appearance before a Senate inquiry where she denied any knowledge of the P10-billion anomaly.
“Until now, despite the time given and opportunity given to her, hindi pa rin siya truthful sa sinasabi niya. Tine-tailor fit niya lang ang mga testimony niya sa testimony ng mga whistleblowers,” he said.
Luy’s lawyer also frowned at the gesture of Napoles’ camp to return P2 billion to the government as he believes that she earned more than what her lawyers are saying.

NAPOLES’ UNFROZEN ASSETS
He said that contrary to what Atty. David stated, Mendoza revealed that Napoles was never penniless, even while in detention, because she still has assets that have yet to be frozen.
Among Napoles’ assets that were not included in the freeze order issued by the Manila Regional Trial Court Branch 22 were three condominium units in Makati worth P200 million. She also has properties in the United States, which include an inn, a Ritz Carlton Residences condominium unit in Los Angeles, and a residential lot and preschool in California.
Of the 30 cars allegedly owned by Napoles, only 10 of these were included in the freeze order. Among the vehicles not included in the preservation order are luxury brands including BMW, Hummer, Land Rover, Mercedes Benz, and a Range Rover.
It was also revealed that Napoles owned shares of stocks in Manila Polo Club, Manila Golf Club, Palm Country Club, Tower Club, Tagaytay Highlands, Club Punta Fuego, JTKC Group of Companies, and Las Piñas Doctors Hospital that are yet to be frozen.
JTKC, a holding firm with interests in real estate, hospitality, financial services, mining, and manufacturing, owns the Discovery Suites in Ortigas, where the office of Napoles’ JLN Corporation is located.
“I think giving P2 billion to the government is adding insult to injury to the public. Kung tutuusin barya lang yung P2 billion para kay Napoles,” he said.
But Senator Sergio Osmeña III said that before the government accepts Napoles’ proposal, she should first make a proper and truthful accounting of the amount of public funds she allegedly stole.
Meanwhile, the Supreme Court ordered the Office of the Ombudsman to file its comment in 10 days on the petition and the plea for temporary restraining order (TRO) filed by Sen. Ramon “Bong” Revilla Jr. to stop the filing of charges against him before the Sandiganbayan.
Share:
Newer Post Older Post