Manny Pacquiao Welcomes To The PBA As KIA Team Headcoach 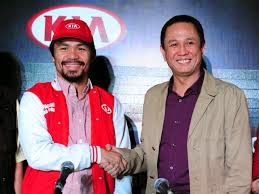 Manny Pacquiao is now officially a member of the PBA family. After months of speculation, the eight-division boxing world champion took on the role of head coach for Team KIA, one of the three possible expansion teams in the upcoming 40th season of the PBA.

Governor Jose Chavez Alvarez of Palawan who also serves as the Chairman of Columbian Autocar Corporation appointed Pacquiao as Team KIA’s head coach during the press conference held at the Pacific Star Building in Makati.

“I’d like to thank members of Team Kia,” Pacquiao said in Filipino. “I’m very happy that I was selected as the head coach. I need to prove that I can also show my skills in basketball and not just in boxing, specially because I’m the head coach of the team.”

“Be on the look-out for what’s next. Although it will be KIA’s first time to enter the PBA, I promise that we won’t let you down.”

During the press conference, Pacquiao explained that the main reason for his entrance to the PBA is his love for basketball.

“Before boxing, I already loved basketball,” said Pacquiao. “When I signed my first boxing contract, I really though it was a basketball contract. That’s how I got into boxing,” he joked.

Pacquiao will now add PBA head coach to his list of responsibilities alongside being a Congressman and the reigning WBO welterweight champion.

“Time management and self discipline are the keys for me to handle everything,” said the multitasker when asked how he’ll juggle all of it.


Pacquiao also answered questions regarding his desire to be a playing coach with Team KIA.

As of now, I am the head coach. I’m still not decided if I’d play in the PBA. My focus is to get good players and create a good team,” he said. “Basketball is also a game of strategies so I think I’ll be able to use my experience as a boxer specially in training. I just hope all my players are ready for the training we will have.”

Pacquiao was present during the try-outs for Team KIA last week. Although he admitted that some players already have spots in his team, he clarified that it’s not complete yet.

“We have some players but our lineup is not complete. The draft will be in June and August and we may be able to get some players from there,” Pacquiao said pointing to the upcoming dispersal and rookie drafts.

Pacquiao was also asked if he’s looking forward to coaching against the likes of Tim Cone, Yeng Guiao, and Norman Black.

“Their players are Class A,” Pacquiao said. “The focus for our team will be to stop the scoring by playing good defense. I’m not saying that we will not be able to get good players but whoever we get, we’ll make it a point to make them better with our training which will be a mix of basketball training, boxing training, and plyometrics.”

According to the boxer, his experience in running a team in the Liga Pilipinas and in many commercial leagues all over the Philippines will help him deal with coaching in the PBA. The incoming coach already has the identity of his team all figured out.

“I want the team to play a fast-paced game but it all depends on our opponents,” Pacquiao said. “I need to get my players ready specially with their stamina. My priority are the fans the performance of Team KIA.”
Share:
Newer Post Older Post