What Is Hard Disk Drive 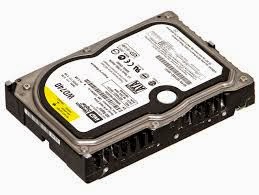 A hard disk drive (HDD) is a data storage device used for storing and retrieving digital information using rapidly rotating disks (platters) coated with magnetic material. An HDD retains its data even when powered off. Data is read in a random-access manner, meaning individual blocks of data can be stored or retrieved in any order rather than sequentially. An HDD consists of one or more rigid ("hard") rapidly rotating disks (platters) with magnetic heads arranged on a moving actuator arm to read and write data to the surfaces.
Introduced by IBM in 1956, HDDs became the dominant secondary storage device for general purpose computers by the early 1960s. Continuously improved, HDDs have maintained this position into the modern era of servers and personal computers. More than 200 companies have produced HDD units, though most current units are manufactured by Seagate, Toshiba and Western Digital. Worldwide revenues for HDD shipments are expected to reach US $33 billion in 2013, a decrease of approximately 12% from US $37.8 billion in 2012.
The primary characteristics of an HDD are its capacity and performance. Capacity is specified in unit prefixes corresponding to powers of 1000: a 1-terabyte (TB) drive has a capacity of 1,000 gigabytes (GB; where 1 gigabyte = 1 billion bytes). Typically, some of an HDD's capacity is unavailable to the user because it is used by the file system and the computer operating system, and possibly inbuilt redundancy for error correction and recovery. Performance is specified by the time to move the heads to a file (Average Access Time) plus the time it takes for the file to move under its head (average latency, a function of the physical rotational speed in revolutions per minute) and the speed at which the file is transmitted (data rate).
The two most common form factors for modern HDDs are 3.5-inch in desktop computers and 2.5-inch in laptops. HDDs are connected to systems by standard interface cables such as SATA (Serial ATA), USB or SAS (Serial attached SCSI) cables.
As of 2014, the primary competing technology for secondary storage is flash memory in the form of solid-state drives (SSDs). HDDs are expected to remain the dominant medium for secondary storage due to predicted continuing advantages in recording capacity, price per unit of storage, write latency and product lifetime. However, SSDs are replacing HDDs where speed, power consumption and durability are more important considerations.
Share:
Newer Post Older Post