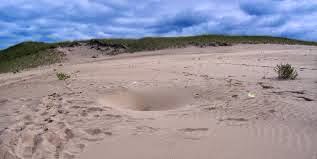 Last summer, 6-year-old Nathan Woessner was walking across the sands of Mount Baldy in the Indiana Dunes National Lakeshore when he suddenly disappeared into a deep hole.
It took a team of rescuers about three hours to pull Woessner to safety from beneath 11 feet (3.4 meters) of sand and sediment, according to the Chicago Tribune.
More holes have appeared in Mount Baldy, forcing officials with the National Park Service (NPS) to close part of the park, located 55 miles southeast of Chicago on the shores of Lake Michigan. But why are these dangerous holes suddenly appearing in the sand dunes?
"We don't know exactly what's going on out there," Ken Mehne, law enforcement specialist for the park, told the Tribune. "We can't let folks out onto the area until we know it's safe."

Deep holes appear and disappear
The incident deeply affected geologist Erin Argyilan, a professor of geosciences at Indiana University Northwest. She was doing research at the base of Mount Baldy when she heard the screams of Woessner's parents.
"I cried for three days," Argyilan, who was pregnant at the time and was unable to assist in the boy's rescue, told the Tribune. "I couldn't help in the moment. So now I have to do what I can to learn why this is happening."
Other experts are also interested in the strange holes in Mount Baldy, several of which have appeared since last year, only to collapse and be filled in with sand a day later. Some of the holes were so deep they could not be measured with the researchers' measuring tapes.

Is it quicksand?
According to scientists, quicksand — that old trope of jungle-adventure movies — actually does exist, though it's not as deadly as it appears in Tarzan films.
Quicksand is a sloshy mix of sand and water that looks solid when viewed from above, but will collapse into a more liquid form if a heavy object, like a human or animal, disturbs it. After liquefying, the mix tends to solidify, trapping the legs of an animal in wet, heavy sand.
There are also dry forms of quicksand, according to researchers. Experiments under controlled laboratory conditions have shown that manmade sand can suck an object under its surface, but this type of deep, dry quicksand has never been observed in nature, and it's not been established that Mount Baldy is an example of dry quicksand.

Using ground-penetrating radar
NPS crews have teamed with the Environmental Protection Agency researchers to get to the bottom of the mysterious holes in Mount Baldy. Ground-penetrating radar (GPR) has been used to get a better understanding of the large sand dune.
The GPR surveys revealed a layer of soil buried beneath the shifting sands that now cover Mount Baldy. That layer of soil was exposed to the surface during part of the 20th century, according to an NPS statement.
"This particular dune has a complicated history," Argyilan said, referring to Mount Baldy. The site was once mined for sand used in the manufacture of glass Mason jars. There are also manmade structures like an old wooden staircase buried beneath the surface of the dune.

Old photos reveal what's buried
Argyilan has examined historical photographs of the area to determine what has changed since the 1930s. Trees and grass that once covered Mount Baldy are now also buried.
These discoveries have led researchers to what they consider their leading hypothesis: Some items buried beneath the sandy surface — trees, brush or manmade structures or debris — "were buried by the rapid landward movement of the dune during the late 1900s," according to an NPS statement.
"The age of the materials and the wet conditions during the spring of 2013 may have forced these materials to become unstable, collapsing and creating openings to the surface," according to the statement.
The National Park Service is continuing to use GPR and core samples to determine what lies beneath Mount Baldy, and how that may contribute to the appearance of deep holes in the dune. For the time being, the area remains off-limits to park visitors.
Share:
Newer Post Older Post