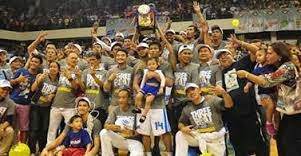 In front of 10,221 strong fans in attendance at the historic PhilSports Arena, the Coffee Mixers continued to write another chapter in PBA history books with a 100-91 Game 4 win over Talk ‘N Text in the 2014 PLDT Home TVolution PBA Commissioner’s Cup Finals Thursday, taking the best-of-five championship series, three games to one.

After being down early 1-17, the Mixers crawled their way back to the game and struck at the right time to secure for coach Tim Cone his league-best 17th title in the PBA, further cementing his place at the top of the other PBA coaching greats.

“This is really special. This is a special group of people and I’m really speechless,” said Cone, as he clinched his latest title in the very same venue where he won his PBA first championship. Trailing 84-87 with four minutes remaining, San Mig unloaded a 16-4 windup, powered by big shots from Finals MVP James Yap and Mark Barroca.

The Coffee Prince finished the game with 22 points, 12 of which coming in that fateful fourth quarter, while Big Game James scored all of his 10 points in the payoff period.

James Mays had a double-double of 18 points and 15 rebounds, to go with his three assists, five steals, and two blocks for the Mixers. Joe Devance and Ian Sangalang had 12 markers each, while Justin Melton kept San Mig afloat with his 11 points, all in the first half. Alapag led the Tropang Texters with 17 points on 4-of-10 shooting from three-point region, while Howell had his own double-double of 16 points and 12 boards.

Ranidel de Ocampo and KG Canaleta also knocked down 16 markers each, while Kelly Williams finished the game with 12.

Two down, one to go for the Grand Slam.

“That’s the last thing we’re gonna talk about as a team,” Cone said. “We’re not gonna talk about it because there’s so much pressure in winning a Grand Slam. But this championship obviously has given us an opportunity to achieve that. And that should give us a real lift coming into the next conference.” He added, “It’s unfathomable for me to think that we have a game in six days (against Barako Bull). I don’t even know how to give time off. But we’re gonna lean on the energy of Marqus (Blakely) and Allein (Maliksi) and see if we can make a run on it. We don’t want to use this conference as an excuse for the next conference.” - See more at: http://pba.inquirer.net/45101/san-mig-makes-it-3-straight#sthash.o6VwMsDo.dpuf
Share:
Newer Post Older Post