Tensions Risen Between China And Vietnam 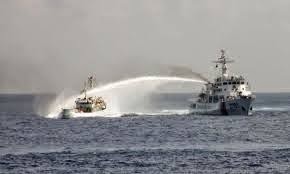 Japan said on Thursday it was "deeply worried" by China's behaviour in a spat with Vietnam over contested waters, and urged Beijing to rein in its "provocative" actions.
The comment comes after Hanoi said Chinese vessels rammed its patrol ships and turned water cannon on them near a controversial drilling rig in a disputed patch of the South China Sea.
It also comes as Japan and China continue to face off in their own territorial row over a small island grouping in the East China Sea and amid claims that Beijing is becoming increasingly assertive.
"We have strong concerns as there is information that many Vietnamese vessels were damaged and some people were injured," Chief Cabinet Secretary Yoshihide Suga told reporters in Tokyo.
"We are deeply worried as regional tensions have risen with China unilaterally starting rigging activities in disputed waters" in the South China Sea, the top government spokesman said.
"We recognise this incident is part of China's unilateral and provocative maritime activities," he said.
Suga said China should explain to Vietnam and the international community the basis on which it was acting and added Japan strongly wants China to refrain from provocative moves and "act in a self-restrained manner".
Hanoi said Wednesday that Chinese ships protecting a deep-water drilling rig in disputed waters had used water cannon to attack Vietnamese patrol vessels and had repeatedly rammed them, injuring six people.
Tensions between the communist neighbours have risen sharply since Beijing unilaterally announced last week it would relocate the rig -- a move the United States has described as "provocative".
Vietnam deployed patrol vessels after the China Maritime Safety Administration issued a navigational warning on its website saying it would be drilling close to the Paracel Islands -- which are controlled by China but claimed by Vietnam.
The two countries, who fought a brief border war in 1979, have been locked in a longstanding territorial dispute over the waters, and frequently trade diplomatic barbs over oil exploration, fishing rights and the ownership of the Spratly and Paracel Islands.
China claims sovereign rights to almost the whole of the South China Sea, leading to disagreements with other countries that surround the sea, chiefly with the Philippines, which has proved willing to stand up for itself.
Beijing's dispute with Japan is one of the more volatile flashpoints in regional relations, with both sides deploying paramilitary vessels -- backed at a distance by naval ships -- to the contested Senkaku islands, which China calls the Diaoyus.
The disputes have given common cause to Japan, the Philippines and Vietnam, with Manila particularly welcoming of Tokyo's moves to toughen up its defence stance, which it sees as offering a counterbalance to growing Chinese power.
Share:
Newer Post Older Post