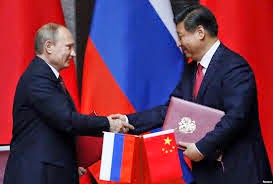 Chinese President Xi Jinping on Tuesday held talks with visiting Russian leader Vladimir Putin, as the two powers seek to build ties in the face of Western criticism and territorial disputes.
Putin is visiting China's commercial hub Shanghai for an Asian security summit and the two countries will also show off their military prowess as 14 ships begin week-long drills in the East China Sea.
The visit is Putin's first since Xi became head of state last year and could see a huge and long-awaited natural gas deal finally signed.
A welcoming ceremony was held for Putin before the formal talks started, China's official Xinhua news agency said in a brief report.
Russia's relations with the United States and European Union have plunged to a post-Cold War low in recent months over its seizure of Crimea and Western accusations Moscow is fomenting unrest in the east of Ukraine.
At the same time, Beijing is bickering with neighbours over maritime territorial disputes, including Vietnam, Japan and the Philippines.
"For the Russians, it is much more about showing 'We have other options... We've got a very strong relationship with China'," said Raffaello Pantucci, senior research fellow at the Royal United Services Institute for Defence and Security Studies.
"The Chinese are much more agitated about what happens on the sea and one sees support there from Russia," he said.
The two countries are both veto-wielding members of the United Nations (UN) Security Council, are regularly criticised by human rights groups, and have often worked together to counter the United States on a range of issues.
- Closer ties -
They were at times close allies during the Cold War, when China and the then-Soviet Union were both Communist.
But a state-run Chinese newspaper on Tuesday denied closer ties with Russia were aimed at the West, including the United States.
"Closer relations are not directed at any third party but play an important role in supporting each other in safeguarding strategic space and avoiding external pressure," said the Global Times newspaper, which is known for its nationalistic editorial stance.
Speaking on the eve of his visit, Putin told Chinese media that ties were at their "highest level" in history.
Officials from both countries say companies are close to completing a long-delayed deal for Russia to export natural gas to energy-hungry China, as Moscow diversifies away from the European market, but price has been a sticking point.
Putin's top foreign adviser has said some 30 agreements are expected to be signed during the visit.
The Chinese and Russian leaders will on Wednesday attend the formal opening of the Conference on Interaction and Confidence Building Measures in Asia, a little-known Asian security forum, at a time when China has locked horns with its Asian neighbours over disputed territory.
Relations between Beijing and Hanoi have worsened after China's move earlier this month to send a deep-water oil drilling rig into contested waters in the South China Sea, sparking violent anti-Chinese protests in Vietnam in which two Chinese were killed.
China and Japan have a long-running feud over disputed islands in the East China Sea, while the Philippines accuses China of reclaiming land on a disputed reef within its exclusive economic zone under a UN convention.
Share:
Newer Post Older Post