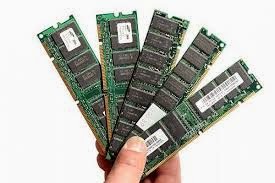 Random-access memory (RAM) is a form of computer data storage. A random-access memory device allows data items to be read and written in roughly the same amount of time regardless of the order in which data items are accessed. In contrast, with other direct-access data storage media such as hard disks, CD-RWs, DVD-RWs and the older drum memory, the time required to read and write data items varies significantly depending on their physical locations on the recording medium, due to mechanical limitations such as media rotation speeds and arm movement delays.
Today, random-access memory takes the form of integrated circuits. Strictly speaking, modern types of DRAM are not random access, as data is read in bursts, although the name DRAM / RAM has stuck. However, many types of SRAM are still random access even in a strict sense. RAM is normally associated with volatile types of memory (such as DRAM memory modules), where stored information is lost if the power is removed, although many efforts have been made to develop non-volatile RAM chips. Other types of non-volatile memory exist that allow random access for read operations, but either do not allow write operations or have limitations on them. These include most types of ROM and a type of flash memory called NOR-Flash.
Integrated-circuit RAM chips came into the market in the late 1960s, with the first commercially available DRAM chip, the Intel 1103, introduced in October 1970.
Share:
Newer Post Older Post