Possible Pacquiao Vs Marques 5 In Macau 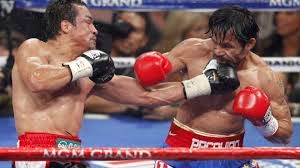 The numbers of the Manny Pacquiao versus Timothy Bradley rematch are in and Bob Arum is not ecstatic about it. The first fight between Pacquiao and Bradley generated 890,000 pay-per-view buys. With the revenge card in play for Pacquiao, the second fight was expected to do more or at least equal the sales of the first one.
"We're between 750,000 and 800,000. Sure, it's a disappointment," Arum told Dan Rafael.
The head of Top Rank Promotions added that Pacquiao’s numbers took a hit because he was against a non-Hispanic opponent.
“The absence of Mexican or Hispanic opponent hurt,” Arum added. "If you had a challenger like, for example, Marquez, the fight would do over a million buys. Tim is a great fighter but he's not Hispanic and he we tried everything to energize the black community without that much success. But we all made money on the fight. We did OK.”
With the disappointing numbers in pay-per-view buys in the United States, Arum bared that Pacquiao could return to Macau for his next fight later this year.
"Having (future Pacquiao) fights in Macau makes so much sense because we can do huge site fees and we want to launch pay-per-view in China,” Arum explained. “We couldn't get it up and running for the [Brandon] Rios fight but we will, and then, between that and the site fee, we won't be so reliant on the pay-per-view in the United States."
Against Rios, Pacquiao generated about 500,00 buys but Arum explained that the site fee that The Venetian Macau paid them made up for the poor sales in the United States.
In a separate interview with Victor Salazar, Arum said that a possible fifth fight between Pacquiao and Juan Manuel Marquez could happen in Macau.
“Juan Manuel To Macau? I don’t see why not,” explained Arum. “Because Nacho (Beristain)  is saying if Marquez fights Manny, he doesn’t want the fight to be in the United States because of the high income tax. What else could he thinking of other than Macau?”
Before plans for a fifth fight could be made, Marquez must first defeat Mike Alvarado in their fight this Sunday.
Share:
Newer Post Older Post