One Of The Scarriest Road "Transfăgărășan Road, Romania" 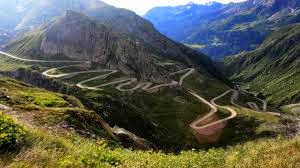 The Transfăgărășan or DN7C is the second-highest paved road in Romania. Also known as Ceaușescu's Folly, it was built as a strategic military route, the 90 km of twists and turns run north to south across the tallest sections of the Southern Carpathians, between the highest peak in the country, Moldoveanu, and the second highest, Negoiu. The road connects the historic regions of Transylvania and Wallachia, and the cities of Sibiu and Pitești.

The road climbs to 2,034 metres altitude, making it the 2nd highest mountain pass in Romania after Transalpina. The most spectacular route is from the North to South. It is a winding road, dotted with steep hairpin turns, long S-curves, and sharp descents. The Transfăgărășan is both an attraction and a challenge for hikers, cyclists, drivers and motorcycle enthusiasts alike. Due to the topography, the average speed is around 40 km/h. The road also provides access to Bâlea Lake and Bâlea Waterfall.
The road is usually closed from late October until late June because of snow. Depending on the weather, it may remain open until as late as November. It may also be closed at other times, because of weather conditions (it occasionally snows even in August). There are signs at the town of Curtea de Argeș and the village of Cartisoara that provide information on the passage. Travellers can find food and lodging at several hotels or chalets (cabane) along the way.
It has more tunnels (a total of 5) and viaducts than any other road in Romania. Near the highest point, at Bâlea Lake, the road passes through Bâlea Tunnel, the longest road tunnel in Romania (884 m).
Among the attractions along the southern section of the road, near the village of Arefu, is the Poienari fortress. The castle served as the residence of Vlad III the Impaler, the prince who inspired Bram Stoker’s Dracula character. There is a parking area and a path to the ruins.
The northern section is used for annual cycling competitions including the Tour of Romania (Romanian: Turul României). The difficulty of this section is considered to be very similar to Hors Categorie climbs (literally beyond categorization) in the Tour de France.