Lance Stephenson Blows in the Ear of LeBron James 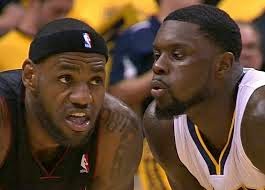 There's at least some precedent for players entering the huddles of opponents. I'm not sure there's much basis for Stephenson blowing into the ear of LeBron James as if he were a cartoon mosquito:


If you choose to go with only the most sober analysis, then the Indiana Pacers beat the Miami Heat in Game 5 of the Eastern Conference finals because LeBron James was called for five fouls in the first 2½ quarters and Paul George scored 37 points, including 21 of his team's 29 in the fourth quarter. Yet, for those who prefer to judge a game purely on insanity and off-kilter entertainment, the star of the night was Pacers guard Lance Stephenson.
The four-year pro has been identified as one of the NBA's most active pests already in this postseason, having already been fined for an extremely dramatic flop in Game 2 of this series and proclaiming that he was in the head of LeBron despite little evidence from the star's performance to support that fact. In terms of the full body of work, though, Stephenson's Game 5 was a massive step forward in his career as a troll.