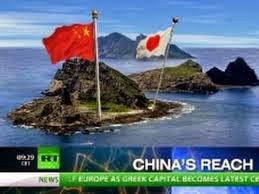 TOKYO — Japan on Sunday accused China of "dangerous" maneuver above the disputed East China Sea after a Chinese fighter flew within roughly 30 meters (100 feet) of a Japanese military aircraft.

A Japanese Defense Ministry spokesman said that a Chinese SU-27 jet on Saturday flew close by a Japanese OP-3C surveillance plane above the waters where the countries' air defense identification zones overlap.

Another Chinese SU-27 fighter also flew close by a Japanese YS-11EB plane in the same airspace, the ministry said.

One fighter jet flew about 50 meters and the other was as close as 30 meters to the Japanese planes, according to the spokesman.

The incidents come as relations between Japan and China are strained amid a territorial dispute over Tokyo-controlled islands in the East China Sea.

"They were dangerous acts that could lead to an accident," Japanese Defense Minister Itsunori Onodera told reporters on Sunday.

"The Japanese crew reported that the fighters were flying with missiles, which raised the tension as they handled the situation.

"I consider the (Chinese fighters) acted out of rule."

Tokyo protested Beijing over the incidents through diplomatic channels, he said.

The Chinese fighters did not enter the Japanese zone, according to the Asahi Shimbun daily.

Chinese state-owned ships and aircraft have periodically approached the Senkaku islands, which China also claims and calls the Diaoyus, to demonstrate Beijing's territorial claims in the East China Sea.