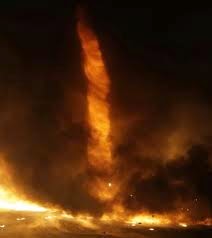 As dozens of wildfires rage across the hills of San Diego County in Southern California, thousands of firefighters are battling conditions such as erratic winds, rough terrain and extreme heat.
More than 14,000 acres (57 square kilometers) have been burned — aided by the hot, dry Santa Ana winds — and the fires remain out of control in many areas. Thousands of people have been forced to evacuate, numerous homes and buildings have been destroyed, and at least one death has been blamed on the wildfires.
The infernos have even spawned dramatic fire whirls — also known as fire devils, fire tornadoes or firenadoes. These immense spires of whirling flames resemble something from a medieval vision of hell. What is a fire tornado, and how dangerous are they?
A fire tornado isn't really a tornado at all. A true tornado is formed when three key elements collide: warm, moist air close to the ground; atmospheric instability, a condition that promotes the vertical movement of air; and clashing air fronts that act to propel moist air upward.

The physics of a firenado
As hot air rises from the ground, it forms vertical columns, or "chimneys," until it becomes less dense, cools and then dissipates at higher altitudes. As more hot air is pulled into the rising column, it begins to swirl in a vortex, not unlike the vortex that's formed when water drains from a bathtub.
These vortices are created by the angular momentum of fluids (liquids, or gases such as air). Angular momentum dictates that as an object gets closer to the center of rotation, it speeds up. Spinning figure skaters demonstrate this when they pull their limbs in toward the center of their bodies, which makes them spin faster.
In a dust devil, the hot air spinning upward in a vortex picks up sand, dirt, leaves and whatever else is lying on the ground. A fire tornado, however, picks up burning embers, ash, flaming-hot gases and flammable debris, creating a terrifying tower of flame that can extend hundreds of feet into the air.

Is a firenado dangerous?
Most fire tornadoes last only a few minutes — one reason they've been captured on video so rarely. As the hot air rises and cools, its strength diminishes, and whatever fuel creates the firenado will eventually burn out.
Nonetheless, firenadoes can be extremely dangerous — temperatures can reach 2,000 degrees Fahrenheit (1,093 degrees Celsius) in a fire tornado. Additionally, because they move quickly, they can cut a swath of destruction for a considerable distance in just seconds and spread fires across a wide area.
Even experts are sometimes surprised by the destructive force of a fire tornado: In 2000, a fire whirl under observation by a crew from the California Department of Forestry and Fire Protection jumped a firebreak, lifted an all-terrain vehicle off the ground and smashed it into an SUV, crushing part of the SUV and injuring a crew member.
In 1926, a series of fire tornadoes were spawned after lightning struck a Union Oil Co. tank farm near San Luis Obispo, California. The resulting fire burned for five days; one fire whirl traveled eastward and struck a home, lifting it into the air and carrying it across a field until it was dropped, destroying the house and killing two people inside it.

The firestorm of Peshtigo
Perhaps the worst series of firenadoes on record occurred during the wildfires that swept across Peshtigo, Wisconsin, and the surrounding area in 1871. Fed by hot, dry winds and probably ignited by slash-and-burn agricultural techniques, a wildfire moving as fast as 100 mph (161 km/h) swept into town and set one of the town's several lumberyards aflame.
The resulting firestorm caused mind-boggling damage: Railcars, houses and commercial buildings were thrown into the air, and an estimated 1.5 million acres (6,070 square km) were burned.
The fire was intense enough to leap across the waters of Green Bay and burn parts of the Door Peninsula. At least 1,500 people died — many were buried in a mass grave, since nobody was left alive to identify the bodies of the deceased.