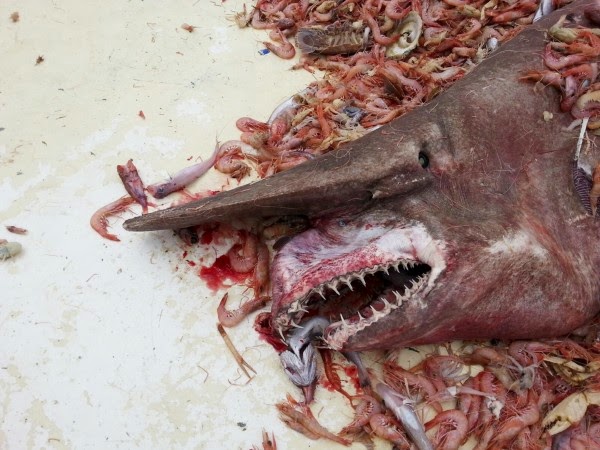 These sharks are so rarely encountered that any information about them is eagerly devoured by researchers, says John Carlson, a research biologist for the U.S. National Oceanic and Atmospheric Administration (NOAA) Fisheries Service. After Moore examined his curious catch and took a series of photos of it, he released it back into the ocean and contacted NOAA. Moore’s photos were referred to Carlson, who specializes in sharks and was excited to get more data on this rare one.
“We don’t know how long they live; we don’t know how often they reproduce, or even how big they are when they reproduce,” Carlson says. “They’re a mystery.”
Moore had told NOAA he thought the shark he released was about 18 feet (5.4 meters) long. When Carlson and colleagues analyzed Moore’s photographs, they gauged the length to be more like 15 feet (4.5 meters) long. And they made an educated guess about the shark’s sex.
Carlson says male sharks have external sexual characteristics called claspers, two fin-like appendages near the tail that males use to hold on to females while mating. “From the photographs, we don’t see those, so we’re suspecting it’s a female,” he says.

Life in the Dark
Moore caught the goblin shark at around 2,000 feet (610 meters) deep. That’s on the shallower end of the average depth range for this species, Carlson says: They’re usually found between 2,000 and 3,000 feet (610 and 914 meters) deep. That makes it one of the deepest occurring species among sharks and their relatives—and many of the shark’s unusual features probably are adaptations to its habitat, he says. (Read about other animals with weird snouts.)
Sharks have a series of sensors in their head called ampullae of Lorenzini, which enable them to pick up the electrical signals of animals around them. The goblin shark’s unusually shaped head may provide an advantage in the gloomy deep, Carlson says, as the distribution of those sensors along the long, flat blade would extend the radius in which the sharks could detect prey. ”It’s the same sort of thing with hammerhead sharks,” he says, with the ampullae found along the edge of the animal’s distinctively shaped head.
Once a goblin shark locates its prey, that’s where its needle-like teeth come in. Carlson says the teeth act like knives, impaling and holding on to soft-bodied prey such as fish and squid.

Shrouded in Mystery
The first recorded appearance of a goblin shark in the Gulf of Mexico was fairly recent, in 2000. Before that, the last time anyone reported seeing a goblin shark in the North Atlantic was in the 1970s off the Bahamas, says Carlson.
They’ve been found in the waters off Brazil, French Guiana, Colombia, and the Indo-Pacific, but ”probably 80 percent of known records [of these sharks] occur off Japan,” the research biologist says.
Carlson and colleagues are working on a paper describing this latest goblin shark sighting in the Gulf of Mexico, and are trying to figure out if there are hot spots for this animal around the world. The scientists aren’t sure whether goblin sharks are just more abundant around Japan or if the lopsided sightings are a consequence of uneven sampling by researchers.
To build his knowledge of goblin sharks, Carlson says, he would have loved to have seen the specimen Moore pulled up. But he’s glad that Moore was able to release it alive, to resume its mysterious life in the deep.