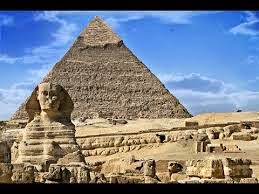 The ancient Egyptians who built the pyramids may have been able to move massive stone blocks across the desert by wetting the sand in front of a contraption built to pull the heavy objects, according to a new study.
Physicists at the University of Amsterdam investigated the forces needed to pull weighty objects on a giant sled over desert sand, and discovered that dampening the sand in front of the primitive device reduces friction on the sled, making it easier to operate. The findings help answer one of the most enduring historical mysteries: how the Egyptians were able to accomplish the seemingly impossible task of constructing the famous pyramids.
To make their discovery, the researchers picked up on clues from the ancient Egyptians themselves. A wall painting discovered in the ancient tomb of Djehutihotep, which dates back to about 1900 B.C., depicts 172 men hauling an immense statue using ropes attached to a sledge. In the drawing, a person can be seen standing on the front of the sledge, pouring water over the sand, said study lead author Daniel Bonn, a physics professor at the University of Amsterdam.
"Egyptologists thought it was a purely ceremonial act," Bonn told Live Science. "The question was: Why did they do it?"
Bonn and his colleagues constructed miniature sleds and experimented with pulling heavy objects through trays of sand.
When the researchers dragged the sleds over dry sand, they noticed clumps would build up in front of the contraptions, requiring more force to pull them across.
Adding water to the sand, however, increased its stiffness, and the sleds were able to glide more easily across the surface. This is because droplets of water create bridges between the grains of sand, which helps them stick together, the scientists said. It is also the same reason why using wet sand to build a sandcastle is easier than using dry sand, Bonn said.
But, there is a delicate balance, the researchers found.
"If you use dry sand, it won't work as well, but if the sand is too wet, it won't work either," Bonn said. "There's an optimum stiffness."
The amount of water necessary depends on the type of sand, he added, but typically the optimal amount falls between 2 percent and 5 percent of the volume of sand.
"It turns out that wetting Egyptian deserts and can reduce the friction by quite a bit, which implies you need only half of the people to pull a sledge on wet sand, compared to dry sand," Bonn said.
The study, published April 29 in the journal Physical Review Letters, may explain how the ancient Egyptians constructed the pyramids, but the research also has modern-day applications, the scientists said. The findings could help researchers understand the behavior of other granular materials, such as asphalt, concrete or coal, which could lead to more efficient ways to transport these resources.
Share:
Newer Post Older Post