China Warns Us And PH 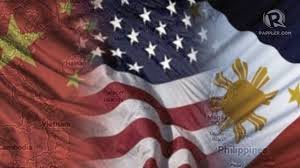 China reminded the United States and the Philippines to keep from disrupting the region’s stability after the two countries signed the Enhanced Defense Cooperation Agreement.
China is currently in a territorial row with the Philippines as the two countries are fighting for sovereignty over the Ayungin Shoal located in the West Philippine Sea (South China Sea).
The Chinese Foreign Ministry noted that it has good reason to require that any agreement preserves the mutual trust between other countries in the region.
“Maintaining peace and stability on the Asia Pacific region is in the common interests of all the relevant regional powers and requires joint efforts from all sides. People have good reason to require that any agreement signed between the United States and the Philippines must be in line with this principle,” says Chinese foreign Ministry spokesman Qin Gang.
Manila and Washington’s new 10-year defense pact gives U.S. forces wider access to bases in the Philippines. EDCA also allows the U.S. troops to preposition ships, aircraft, equipment and troops for maritime security in the country.
The deal was signed Monday, a few hours before U.S. President Barack Obama arrived in Manila for a state visit.
Share:
Newer Post Older Post