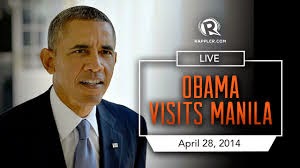 U.S. President Barack Obama arrived in the Philippines Monday for a historic state visit, one that Malacanang said will strengthen Manila’s ties with Washington.
U.S.' presidential plane, the Air Force One, landed at Ninoy Aquino International Airport at exactly 1:30 pm. Obama waved as he got off the plane and was welcomed by Vice President Jejomar Binay, Interior Secretary Mar Roxas, Foreign Affairs Secretary Albert del Rosario, U.S. Ambassador to the Philippines Philip Goldberg.
Obama then boarded the presidential chopper, Marine One, on his way to Malacanang.

The apparently pleased Obama was welcomed at Malacanang by President Benigno Aquino III. The leaders are expected to discuss local and regional issues.
After a meeting with Aquino, Obama will face the media and the head to the U.S. Embassy in Manila. A state dinner will be held in Obama’s honor at the Palace Monday night.

On Tuesday, the U.S. President will deliver remarks at Fort Bonifacio and pay tribute to fallen heroes at the Manila American Cemetery, before heading back to the U.S.

“The visit of President Obama affirms the vigor of our strategic partnership and alliance, and the strength of our people-to-people ties,” a Malacanang statement read.

Manila will be the last stop in Obama’s Asian tour aimed at highlighting his government’s decision to “pivot” to Asia. He has visited Japan, South Korea and Malaysia. This is Obama's first trip to the Philippines. It could be recalled that Obama had to cancel an earlier scheduled state visit to the Philippines due to the U.S. shut down.

A White House statement noted that Obama will focus on U.S. priorities in Asia during his trip. These include modernizing and deepening defense, trade and cultural ties.
The U.S. president’s visit comes at the heels of the Philippines’ move to file a memorial before an international body against China, over claims to the West Philippine Sea.

His visit is also expected to fast-track a new defense deal which will include, among others, increased U.S. military “rotational” presence in the Philippines.

“The treaty alliance between the Philippines and the U.S. has been a cornerstone of peace and stability in the region,” Communications Secretary Sonny Coloma said.

The U.S. is the Philippines’ only treaty ally. The two countries’ partnership includes joint military exercises such as Balikatan, as well as mutual defense and security assistance.

This will be Obama’s first trip to the Philippines since he assumed office in 2009. It will meanwhile be the eighth time a U.S. President visited the country.