The Next BMI Calculator 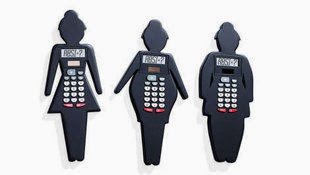 For more than 40 years, scientists have searched for a simple formula for determining who's healthy and who's not. First there was body mass index (BMI), which compares weight with height, but doesn't account for lean muscle mass or bone density. It also doesn't indicate where you carry your weight, an important factor in understanding your overall health. As a result, doctors began embracing waist circumference (WC) as a measure of the dangerous body fat that settles around the belly. But WC, too, can fall short-for failing to factor height into the equation: A 5'10" woman with a 35-inch waist may have a very different health profile from a 5'2" woman with the same girth.
Given rising rates of chronic disease associated with obesity, it's no wonder that the medical community has been laboring to come up with a better metric. Now a father-and-son team-Jesse Krakauer, MD, an endocrinologist, and Nir Krakauer, PhD, an assistant professor of civil engineering at City College of New York-may have developed one: A Body Shape Index (ABSI), which takes into account weight, height and waist circumference.


Why ABSI May Be Better Than BMI
In an initial study, Team Krakauer calculated the ABSI and BMI of more than 14,000 Americans of all shapes and sizes (pregnant women excluded) and found that high ABSI appears to be more accurate than high BMI at predicting mortality. Those with the highest ABSI numbers had more than twice the risk of dying from any cause than those with the lowest. And the researchers found that even when people's BMI fell within the normal range, if they had a high ABSI, they could still be in the danger zone.

Why ABSI May Be Better Than WC
Because ABSI accounts for height, it likely depicts body roundness in a more precise way than waist circumference can. "We believe ABSI is sensitive to some body composition aspects, such as having a higher proportion of abdominal fat and having relatively little muscle mass in the limbs," says Nir Krakauer.


What Does It Mean for You?
Plug your measurements into the calculator the Krakauers have developed. The number you want to note is the relative risk from ABSI. A 1 means you're at average risk of death for your age. Below 1 means a below-average risk; above 1 means greater risk. The good news: You can lower your ABSI by whittling your waist through diet and exercise. Just be sure, as always, to consult your doctor before making dramatic lifestyle changes.
Share:
Newer Post Older Post