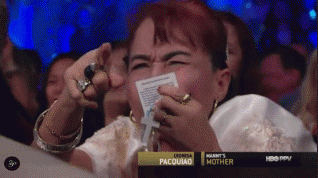 Manny Pacquiao defeated Timothy Bradley Saturday night, likely saving his career, but in the process, it was his mother Dionesia who stole the show and became a national sensation.
During the middle rounds of the fight, HBO's broadcast elected to show what Dionesia puts herself through while her son puts his well-being on the line inside the ring:
Suffice to say, Dionesia goes through a lot every second her son is fighting, and likely has throughout his career. The impact of her antics can't be healthy, but sports fans around the globe have their strange superstitions, so why can't she? Apparently it works.
This is surely not the last time fans will see Dionesia now that HBO has revealed her ringside strategy. Stay tuned.
Share:
Newer Post Older Post