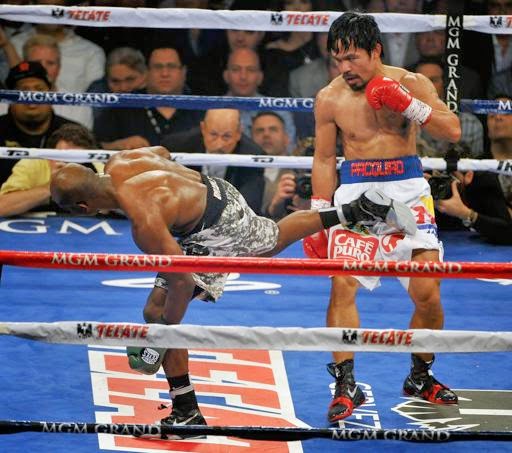 Manny Pacquiao (56-5-2, 38 knockouts) regained the WBO welterweight title with a dominant unanimous decision victory over Timothy Bradley (32-1-0, 12 KOs). After a close fight in the opening rounds, Pacquiao showed that he is the superior fighter as he outlanded Bradley starting in the middle rounds.

The Filipino puncher, who last fought as a challenger against Miguel Cotto, stepped into the ring against a tenacious champion. Bradley showed early in the fight that he has the speed to give Pacquiao problems. The defending champion had his best moment in the fourth round when he buckled Pacquiao’s legs after landing a counter right reminiscent of Juan Manuel Marquez’ signature punch.

“He got me in the fourth round with a solid right hook but I listened to my corner: hands up, timing, counter him,” said Pacquiao after the fight. “I was very careful because his punches were all over.”

After having some success, Bradley quickly faded while Pacquiao gained momentum and sustained it with his top-class stamina. Pacquiao swept the middle rounds as Bradley was reduced to showboating. He stuck his tongue out at Pacquiao as he bobbed and weaved under some of the Pacman’s combinations but he did nothing to win rounds.

“I had to do more because he is much different from the first fight,” Pacquiao said of his opponent. “He improved a lot. There’s a time when I was looking for knockout but he’s tough, he moves around.”

“He’s the better fighter tonight, that’s what it is,” said Bradley who won the first fight eight rounds to four in his opinion. “I was trying to hit him over the top and land one on his chin,” he added explaining why his game plan was so different from their first fight.

Bradley abandoned his boxing and settled on throwing haymakers while Pacquiao expertly picked him apart from outside.

“I just have to go to the gym and get better,” said Bradley who suffered the first loss of his career. “But the war is not over. I want to be the best fighter in the world,” he ended, perhaps hinting that he wants a third match against Pacquiao

“We all wanted to see how the journeys of these two fighters after the fight two years ago. The winding ways that it went, the two devastating fights they went through,” Larry Merchant said to close the broadcast. “But what we saw now tells us we saw what we saw the first time.”

As for Manny Pacquiao, his statement remained simple.