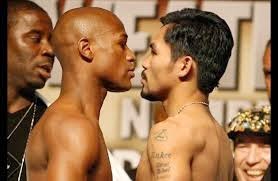 Like Mayweather and Pacquiao, there was also serious beef between Lewis and Tyson during their time. Two years before the fight, Tyson made headlines after saying “There is no one who can match me. My style is impetuous, my defense is impregnable, and I'm just ferocious. I want your heart! I want to eat his children! Praise be to Allah," aimed at Lewis.

Lewis and Tyson also brawled in the press conference leading up to their fight. The scuffle saw Tyson bite Lewis’ leg causing the former to pay US$335,000 to the latter in damages.

Although things never got physical between Pacquiao and Mayweather, they have not seen eye to eye in most things such as the fight purse and the drug testing procedure. But the biggest impediment to the fight is Mayweather’s demand that Bob Arum moves out of the picture for the mega-fight.

“It’s been so many years, months, days," Pacquiao said in the press conference after beating Bradley."But, like I have said, the line is open, 24 hours a day, seven days a week. If [Mayeather] wants to fight, the fight will be on."
Share:
Newer Post Older Post