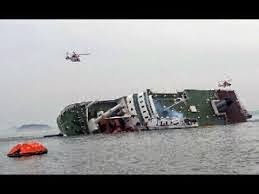 The ferry with 476 people aboard was sailing to the southern island of Jeju when it sent a distress call Wednesday morning after it began leaning to one side, according to the Ministry of Security and Public Administration. The government said about 95 percent of the ship was submerged.