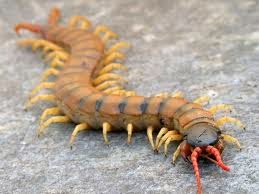 A group of researchers stumbled upon a grisly scene during a field study in Macedonia last year: a dead nose-horned viper with a centipede's head sticking out of its ruptured abdomen.
After a post-mortem, the scientists think it's possible that the centipede quite literally eviscerated the snake from the inside out.

"All of us were astonished, as nobody has ever seen something like this," Ljiljana Tomovi?, a herpetologist at the University of Belgrade, told Live Science in an email. [Amazing Images of Snakes Around the World]
Tomovi? and colleagues were tagging reptiles on May 14, 2013, on Macedonia's Golem Grad, a 44-acre (18 hectares) island in Lake Prespa that's crowded with thousands of tortoises, tens of thousands of dice snakes and hundreds of vipers. The remnants of the death match were discovered when one researcher, Dragan Arsovski, turned over a stone, Tomovi? said.

The unfortunate nose-horned viper (Vipera ammodytes) was a young female that stretched about 2 inches longer than the centipede (7.9 vs. 6 inches, or 20.3 vs. 15.4 centimeters), the researchers wrote last month in a brief report published in the journal Ecologica Montenegrina. But the centipede (Scolopendra cingulate) was actually heavier than the snake, tipping the scales at 114 percent of the snake's body weight (4.8 vs. 4.2 grams, or 0.17 vs. 0.14 ounces).
Nose-horned vipers regularly take on small mammals, lizards and birds, and they've been known to eat centipedes successfully, too. But in this particular case, the snake "gravely underestimated" the size and strength of its prey, the scientist wrote.
A dissection revealed that the snake's visceral organs were missing, or in other words, "the entire volume of its body was occupied by the centipede," the scientists wrote. For this reason, the researchers think it's possible the snake's dinner tried to claw its way out, destroying the viper's internal organs along the way, before eventually dying.
"In general, this invertebrate is extremely tough: It is very hard to kill a full-grown Scolopendra (personal observation)," the authors of the study wrote of the centipede. "Therefore, we cannot dismiss the possibility that the snake had swallowed the centipede alive, and that, paradoxically, the prey has eaten its way through the snake, almost reaching its freedom."
Share:
Newer Post Older Post