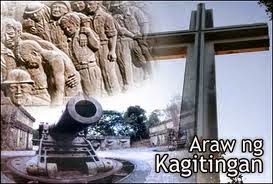 Araw ng Kagitingan (Filipino for "Day of Valor"), also known as Bataan Day or Bataan and Corregidor Day, is a national observance in the Philippines which commemorates the fall of Bataan during World War II. It falls on April 9, although in 2009 it would have coincided with Maundy Thursday and was moved to April 6.