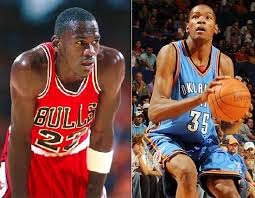 For the 41st game in a row, Kevin Durant scored at least 25 points. Not even Michael Jordan ever did that.
Even so, Durant would probably trade his 38 points for a win.
P.J. Tucker, who had to guard Durant most of Sunday night, scored 11 of his career-high 22 points in the fourth quarter and Phoenix beat the Thunder 122-115, giving the Suns a critical victory in their drive to make the playoffs and dealing a blow to Oklahoma City's tenuous hold on the No. 2 spot in the West.
Goran Dragic scored 26 points, Gerald Green 24 and Eric Bledsoe 18 for the Suns, who shot a season-best 58.4 percent.
With Memphis' loss to San Antonio, the Suns are a game ahead of the Grizzlies for the No. 8 spot in the West and a half-game behind No. 7 Dallas.
Durant's streak surpassed Jordan's 40 in a row of 25 or more and is the longest since Oscar Robertson did it for 46 straight games in 1963-64. Wilt Chamberlain did it in all 80 regular-season games in the 1961-62 season.
And Durant is totally unimpressed his streak.
"I don't really care about it," he said. "I can't wait until it's over."
Russell Westbrook scored 33 for the Thunder, who lead the Los Angeles Clippers by a game for the West's No. 2 playoff spot.
Oklahoma City took its final lead, 112-111, on Durant's two free throws with 2:39 to play.
Phoenix scored the next 10, the first four by Markieff Morris and the last four on free throws by Bledsoe, to lead 121-112 with 20.7 seconds to play. Durant sank a 3-pointer with 12.9 seconds to go, the only Thunder field goal in the final 3:49.
"It's all or nothing right now," Green said. "We don't have a month left to try and make up. We only got a few more games, so it's win or go home for us."
Tucker was a career-best 4 of 5 from behind the arc.
After struggling at the line all night, Phoenix made its last eight free throws.
"Everybody is trying to win at this point," Suns coach Jeff Hornacek said. "It was a good test for us and one that these guys passed."
Phoenix won the season series against Oklahoma City 2-1.
"We feel like very game we play we can win, throughout the league," Tucker said. "We have confidence that we can play with anybody in the league."
Phoenix plays its next three on the road — at New Orleans, San Antonio and Dallas.
"It's a big win for us," Dragic said. "We're a step closer, but we're still a long way from our goal."
Thunder coach Scott Brooks said Phoenix's great shooting was not solely the result of poor defense.
"They're a very good offensive team," he said. "They give you trouble because they're small, they attack, they get to the free throw line, they can make 3s, and they're desperate right now. They're fighting for their playoff lives."
Still, he said, the Thunder "didn't do a good enough job closing out their shooters."
"When you have good shooters you can't have mistakes," Brooks said, "and we had too many mistakes on the defensive end."
The Suns led by as many as 14 points in the third quarter, the last time at 85-71 on Green's 14-footer with 6:10 left, and were up 92-83 after consecutive layups by Dragic and Bledsoe with 4:04 left.
But the Thunder outscored the Suns 8-2 the rest of the quarter, Durant's driving dunk with 13 seconds left cutting Phoenix's lead to 94-91 after three.
Durant and Nick Collison scored to start the fourth quarter and Oklahoma City led for the first time since the first quarter, 95-94, with 11:06 to play.
The lead bounced back and forth after that. Tucker's reverse layup put Phoenix up 111-110 with 1:52 to go.
Marcus Morris sank a pair of jumpers in a 12-4 run that put Phoenix up 38-29 early in the second quarter.
Oklahoma City cut it to 44-41 on Reggie Jackson's driving layup, but Tucker sank a 3, Dragic converted a three-point play then scored on another drive and the Suns were back up 52-43 with 3:53 to go and led 62-53 at the break.
NOTES: The Suns are 20-0 when shooting at least 50 percent from the field. ... Dragic scored all 19 of his first-half points in the second quarter, Green scored 17 in the second half. ... Phoenix plays four of its final five games on the road. Its home game is against Memphis on April 14.
Share:
Newer Post Older Post