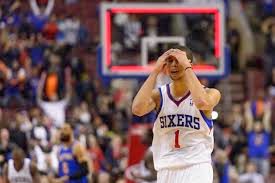 In the second week of November, the Philadelphia 76ers erased a 10-point second-half lead to tie the Houston Rockets and eventually pull away for a 123-117 win. The game left both teams with identical 5-4 records, and … a lot has changed since then.
Not only has Houston become an NBA powerhouse, but the Sixers have taken losing to another level. Nearly historical levels, we should add, as the team’s 120-98 loss to the Rockets on Thursday night tied an NBA record for the longest losing streak in league history. They’ll have a chance to break the 2010-11 Cleveland Cavaliers’ streak of 26 consecutive losses on Saturday when they play the Detroit Pistons.
The loss was typical of the entire streak. The Sixers competed, but coach Brett Brown’s rotation is filled with contributors (several of whom are on 10-day contracts) who are basically holding auditions to maybe earn a gig as end-of-the-bench guys for when the 76ers eventually turn things around. Houston raced out to a 14-point lead that was nearly eliminated by a running Sixers squad in the second quarter as they cut the deficit to one, but the Rockets ran into halftime on a 20-6 run.
When asked how his team would overcome a 14-point halftime deficit as his squad entered the second half, Brown’s answer to CSN Philadelphia reporter Molly Sullivan was succinct and telling and clearly exasperated: “I have no idea.”
Former Rocket and current Sixer scorer James Anderson, who had a career-high 36 points in the overtime win from November, once again lit up the team that cut him. The swingman finished with 30 points, but the team’s backcourt had no answers for James Harden and Jeremy Lin (Patrick Beverley, Houston’s starting point man, left the game in the first half with a sprained right knee), and Dwight Howard had his way with various fringe types in the Houston frontcourt, finishing with 17 points, 13 rebounds and three blocks.
If the 76ers do set a historical mark on Saturday, there is significant worry the team could go the rest of the season without winning a game, something that would set a 36-game mark for futility amongst criticism for tanking a season in the hopes of securing a top draft pick.
Even Sixers alumni can’t help but pile on the team. Philadelphia legend Moses Malone, who helped lead the 76ers to the 1983 NBA title, was in supportive attendance as a guest of the team on Thursday night, but former Sixers player and coach Fred Carter was candid when asked how this current squad would match up against his 1972-73 team. That outfit finished with a 9-73 record, the worst record in history in seasons that went the full 82 games, and that team’s leading scorer decided to throw off the scent in defense of his nine-win crew.
Share:
Newer Post Older Post