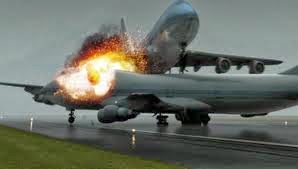 The Tenerife airport disaster was a fatal collision between two Boeing 747 passenger aircraft which occurred on Sunday, March 27, 1977, on the runway of Los Rodeos Airport (now known as Tenerife North Airport), on the Spanish island of Tenerife, one of the Canary Islands. With a total of 583 fatalities, the crash is the deadliest accident in aviation history.
A bomb explosion at Gran Canaria Airport, and the threat of a second bomb, caused many aircraft to be diverted to Los Rodeos Airport. Among them were KLM Flight 4805 and Pan Am Flight 1736 – the two aircraft involved in the accident. At Los Rodeos Airport, air traffic controllers were forced to park many of the airplanes on the taxiway, thereby blocking it. Further complicating the situation, while authorities waited to reopen Gran Canaria, a dense fog developed at Tenerife, greatly reducing visibility.
When Gran Canaria reopened, the parked aircraft blocking the taxiway at Tenerife required both of the 747s to taxi on the only runway in order to get in position for takeoff. The fog was so thick that neither aircraft could see the other, nor could the controller in the tower see the runway or the two 747s on it. As the airport did not have ground radar, the only means for the controller to identify the location of each airplane was via voice reports over the radio. As a result of several misunderstandings in the ensuing communication, the KLM flight attempted to take off while the Pan Am flight was still on the runway. The resulting collision destroyed both aircraft, killing all 248 aboard the KLM flight and 335 of 396 aboard the Pan Am flight. Sixty-one people aboard the Pan Am flight, including the pilots and flight engineer, survived the disaster
Share:
Newer Post Older Post