Uncovered Why Are Billionaires' In Britain Mansions Empty? 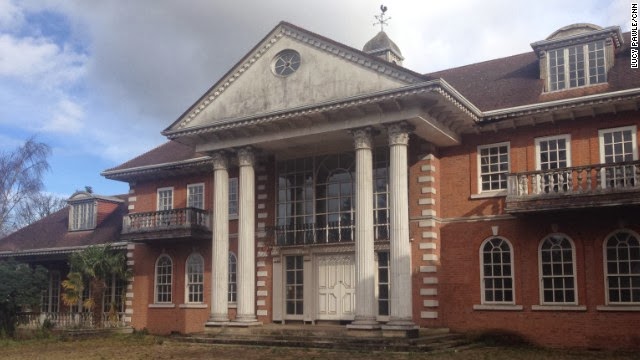 This decaying mansion, The Towers, was bought 25 years ago by a prominent Middle Eastern family.

A third of the houses on Britain's second most expensive street are lying vacant, many abandoned for decades and left to rot.

Behind the padlocked gates and long driveways, up to 20 mansions stand empty on London's The Bishops Avenue, despite a reported combined value of around £350 million ($582 million).
Dubbed "Billionaires' Row," the road's average house costs over £6 million ($9.98 million), but many have been deserted by their wealthy owners.
Despite their dilapidated condition, the houses remain a safe place for wealthy foreigners to park their money because of London's rocketing property prices, which rose 11% last year, and because of the road's reputation as a magnet for the rich and famous.

Anil Varma, a property developer appointed by a hedge fund owner to manage six of the vacant homes, calls it one of "the most expensive wastelands in Europe."
He's hoping to get permission to convert decaying mansion The Towers into luxury apartments. Bought 25 years ago by a prominent Middle Eastern family but never lived in because of planning permission complications, the once-magnificent mansion was abandoned and has fallen into disrepair.
Varma showed CNN through the property, revealing animal skeletons lying on moss-covered floors, paint ripped off the damp-soaked ceilings and stairs which have partially collapsed.
Jersey House, 200 meters up the road, is on sale for £40 million ($67 million) and estate agent Trevor Abrahmsohn says investors aren't put off by the numerous abandoned homes on the road because The Bishops Avenue "is an iconic road, like Rodeo Drive or Wall Street."
Buying a house here "is a statement of wealth... a statement that you've arrived," he told CNN. The street has long been a landing pad for wealthy investors in developing countries undergoing geopolitical chaos: Iranians after the 1979 revolution, eastern Europeans after the collapse of the Berlin Wall and most recently, Chinese oligarchs, he said.
But, as Britain faces a housing shortage and soaring property prices, The Bishops Avenue's empty mansions are likely to add to debate over taxes payable by overseas property buyers -- particularly if they remain empty.
However, Richard Cornelius, who heads the local government branch of Barnet Council, told CNN he "would rather spend public money bringing family houses back into use than getting involved in battles with the lawyers of billionaires."
Share:
Newer Post Older Post