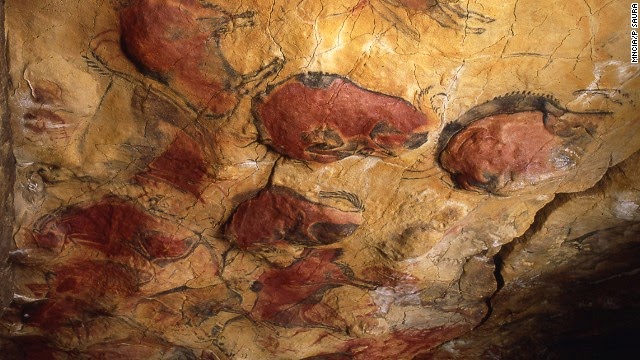 It's been called the "Sistine Chapel of paleolithic art," and it's been closed to the public for more than a decade -- until now.

Yesterday, five members of the public who entered a draw were given a guided tour of the extraordinary prehistoric paintings within the Altamira cave in northern Spain.
The vivid images, up to 20,000 years old, depict an extinct species of bison, wild boar and other animals, along with sprayed hand prints and engravings.
The visit of a lucky few to the twisting, 300-meter-long cave -- sealed in pristine condition by a rockfall for 13,000 years before its discovery in 1879 -- serves a wider purpose beyond their own amazement, however.

Small groups drawn from visitors to the nearby museum on one randomly selected day each week until August will be used to test any destructive impact a human presence might have on the ancient paintings through changes in humidity, temperature, CO2 levels and microbiological contamination, the Guardian reports.
Wearing protective clothing, masks and shoes, the visitors get a tour of the cave lasting just over half an hour, only a portion of which is to be spent gazing at the rock art.
The results will help to determine whether the cave, in the Cantabria region, should be reopened to the public permanently -- a boon to the local economy but an outcome opposed by some scientists.
Share:
Newer Post Older Post