Uncovered The Mystery Of Malaysian flight May Have Lost Signal? 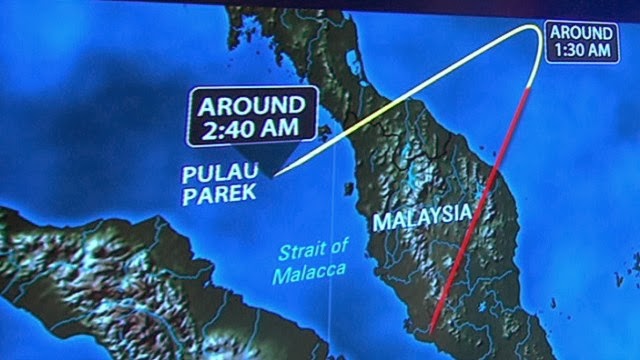 It was 1:30 a.m. when Malaysia Airlines Flight 370 lost all communications, including important transponder signals that send data on altitude, direction and speed. Still, it showed up on radar for about 1 hour, 10 minutes longer -- until it vanished, having apparently moved away from its intended destination, hundreds of miles off course.

Those details -- told to CNN by a senior Malaysian air force official, who declined to be named because he is not authorized to speak to the media -- seemingly shed more light on what happened to the aircraft that mysteriously went missing early Saturday.
But if these assertions are true -- and other reports, citing a different Malaysian official, cast doubt on them -- many big questions remain. Why were the communications lost? Why was the Boeing 777 going the direction it was? And where did it end up?
"Something happened to that airplane, that was obviously out of the norm, that caused it to depart from its normal flight path," said Mark Weiss, a former 777 pilot now with the Washington-based Spectrum Group consulting firm. "... It's difficult not to speculate."
Peter Goelz, former managing director of the National Transportation Safety Board, thinks all this information -- if correct -- ominously suggests that someone purposefully cut off the transponder and steered the plane

"This kind of deviation in course is simply inexplicable," said Goelz.
Other experts aren't convinced that there were bad actors -- be they hijackers or an ill-intentioned crew member. They say there could have been some sort of sudden catastrophic electronic failure or more that spurred the crew to try to turn around, with no luck.
"Perhaps there was a power problem," said veteran pilot Kit Darby, former president of Aviation Information Resources, adding that backup power systems would only last about an hour. "(It is) natural for the pilot, in my view, to return to where he knows the airports."
Still, while they have theories, even those who have piloted massive commercial airliners like this one admit that they can't conclude anything until the plane is found. For now, the massive multinational search has yielded no breakthrough -- which has only added to the heartache for the friends and family of the 239 passengers and crew on board.
The Malaysian air force official's revelations may provide more direction, though clarity and closure are still elusive.
"There are still as many possibilities out there, maybe more, now that we know about the transponders being off and the length of time that plane flew in the air without them," said CNN law enforcement analyst Tom Fuentes. "It still leaves mechanical, terrorism (and) other issues as much in the air as they were before."

Intentional or catastrophic mechanical failure?
According to the Malaysian air force official, the plane's transponder apparently stopped working at about the time flight controllers lost contact with it, near the coast of Vietnam.
The air force eventually and totally lost track of the plane over Pulau Perak, a tiny island in the Strait of Malacca -- many hundreds of miles from the usual flight path for aircraft traveling between Kuala Lumpur and Beijing, the official said.
If the data cited by the source is correct, the aircraft was flying away from Beijing and on the opposite side of the Malay Peninsula from its scheduled route.
Why would the transponder -- an electrical instrument in commercial airline cockpits that continuously transmits information such as altitude, location, direction and speed -- have gone off?
Goelz, the former NTSB managing director, and others point out the only reason for someone to intentionally turn off the transponder is to conceal the plane's location and direction. Someone with nefarious intentions of taking over an aircraft and steering it to where it wasn't supposed to be -- or perhaps planning on crashing it -- might do just that.
"You have to have a very deliberate process to turn the transponder off," he said. "... There might still be mechanical explanations on what was going on, but those mechanical explanations are narrowing quickly."
Anthony Roman, a trained pilot and consultant, said that a fast-moving fire might have moved through the cockpit and rendered everything, including the crew, effectively powerless to do much more than turn the plane around.
"Fires are insidious," Roman told CNN's Wolf Blitzer. "They can happen quickly and knock out multiple systems quickly."
Darby, for one, believes purely mechanical issues remain the most valid possibility now. His main point is: "Everything is electrical." In other words, if there's some sort of "catastrophic failure" for whatever reason, that could knock out systems like the transponder.
If that would happen, the plane could fly for some time without electricity but not indefinitely. Any attempts to steer it would be harder in the dark without functioning flight instruments said Darby, a retired United captain.


Whether the air force official's account is true, that possibility and others make the mystery more and more confounding.

"You couldn't make this story up," said Michael Goldfarb, a former official with the Federal Aviation Administration.
Four scenarios

Terrorism a possibility
Authorities have said they're looking at all possibilities to explain what happened to the Malaysia Airlines aircraft.
Earlier Tuesday, the head of the international police organization Interpol said that his agency increasingly believed the incident was not related to terrorism.
"The more information we get, the more we're inclined to conclude that it was not a terrorist incident," Interpol Secretary General Ronald Noble said at a news conference in Lyon, France.
Yet -- speaking Tuesday about what he called a "very disturbing mystery" -- CIA Director John Brennan insisted terrorism remains a possibility.
"I don't know (what happened)," he said. "But I don't think people should, at this point, rule out any of these lines of inquiry."
The two passengers who have dominated headlines the last two days entered Malaysia using valid Iranian passports, Noble said. But they used stolen Austrian and Italian passports to board the missing Malaysian plane, he said.
Noble gave their names and ages as Pouri Nourmohammadi, 18, and Delavar Seyed Mohammad Reza, 29.
Malaysian police had earlier identified Nourmohammadi, using a slightly different name and age, and said they believed he was trying to migrate to Germany.
Inspector General Khalid Abu Bakar of the Royal Malaysian Police said it doesn't appear the younger Iranian posed a threat.
"We have been checking his background," Khalid said, noting "other police organizations" have been consulted. "And we believe that he is not likely to be a member of any terrorist group," Khalid said.
After he failed to arrive in Frankfurt, the final destination of his ticket, his mother contacted authorities, Khalid said. According to ticketing records, the ticket to Frankfurt was booked under the stolen Austrian passport.

Extensive search for plane
No one knows where these two men and the other 237 people on the plane ended up. Every lead that has raised hopes of tracing the commercial jet has so far petered out.
Over the past few days, search teams have been scouring tens of thousands of square miles of sea between the northeast coast of Malaysia and southwest Vietnam. They have also been searching off the west coast of the Malay Peninsula, in the Strait of Malacca, and north into the Andaman Sea.
The search also encompasses the land in between the two areas of sea.
But it could be days, weeks or even months before the searchers find anything that begins to explain what happened to the plane, which disappeared early Saturday en route to Beijing.
In the case of Air France Flight 447, which disappeared over the Atlantic in 2009, it took five days just to find the first floating wreckage.
And it was nearly two years before investigators found the bulk of the French plane's wreckage and the majority of the bodies of the 228 people on board, about 12,000 feet below the surface of the ocean.
The Gulf of Thailand, the area where the missing Malaysian plane was last detected, is much shallower, with a maximum depth of only 260 feet and an average depth of about 150 feet.
Still, they have to find it first. The newly disclosed revelation about the plane's direction doesn't help, as it means less certainty and more time for currents to move the wreckage around.
"Crucial time is passing," David Gallo, with the Woods Hole Oceanographic Institution, told CNN's Wolf Blitzer on Monday. "That search area -- that haystack -- is getting bigger and bigger and bigger."

Thailand, Singapore, Indonesia, Vietnam, Australia, the United States, China and Malaysia are all taking part in the search, White House spokesman Jay Carney said. Japan has also dispatched a team to the area, with Japanese military and coast guard crews likely to follow, its foreign ministry announced Wednesday.
That helps takes all forms, such as many as 10 Chinese satellites monitoring the area to the helicopters ready-to-dispatch off of U.S. warships.
CNN aviation correspondent Richard Quest described the search as "extremely painstaking work," suggesting a grid would have been drawn over the ocean for teams to comb, bit by bit.
Quest said that the expanding search area shows how little idea rescue officials have of where the plane might be. But he's still confident they'll find it eventually.
"It's not hopeless, by any means. They will find it," he said. "They have to. They have to know what happened."
Until they do, patience is growing thin for friends and family members of those aboard Flight 370.
As a middle-aged man -- the father of one such passenger -- shouted Tuesday at an airline agent in Beijing: "Time is passing by."
Share:
Newer Post Older Post