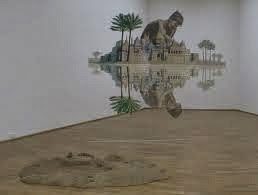 A Fata Morgana is an unusual and complex form of superior mirage that is seen in a narrow band right above the horizon. It is an Italian phrase derived from the vulgar Latin for "fairy" and the Arthurian sorceress Morgan le Fay, from a belief that these mirages, often seen in the Strait of Messina, were fairy castles in the air or false land created by her witchcraft to lure sailors to their death. Although the term Fata Morgana is sometimes applied to other, more common kinds of mirages, the true Fata Morgana is not the same as an ordinary superior mirage, nor is it the same as an inferior mirage.
Fata Morgana mirages distort the object or objects which they are based on significantly, often such that the object is completely unrecognizable. A Fata Morgana can be seen on land or at sea, in polar regions or in deserts. This kind of mirage can involve almost any kind of distant object, including boats, islands, and the coastline.
A Fata Morgana is often rapidly changing. The mirage comprises several inverted (upside down) and erect (right side up) images that are stacked on top of one another. Fata Morgana mirages also show alternating compressed and stretched zones.
This optical phenomenon occurs because rays of light are bent when they pass through air layers of different temperatures in a steep thermal inversion where an atmospheric duct has formed. (A thermal inversion is an atmospheric condition where warmer air exists in a well-defined layer above a layer of significantly cooler air. This temperature inversion is the opposite of what is normally the case; air is usually warmer close to the surface, and cooler higher up.)
In calm weather, a layer of significantly warmer air can rest over colder dense air, forming an atmospheric duct which acts like a refracting lens, producing a series of both inverted and erect images. A Fata Morgana requires a duct to be present; thermal inversion alone is not enough to produce this kind of mirage. While a thermal inversion often takes place without there being an atmospheric duct, an atmospheric duct cannot exist without there first being a thermal inversion.
Share:
Newer Post Older Post