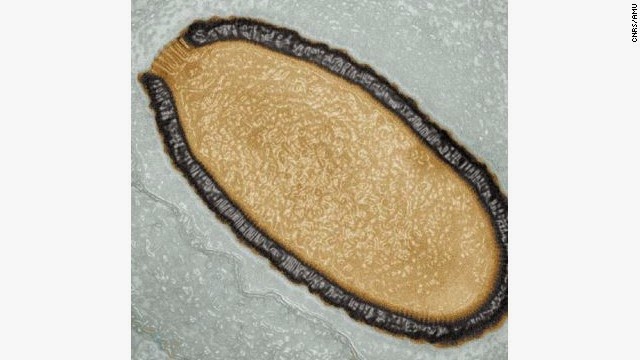 Scientists have unearthed a giant virus more than 30,000 years old from the frozen soil in a remote region of Siberia.

While this ancient virus is harmless to people, the scientists behind the discovery warn that the discovery suggests that the thawing of permafrost in polar regions, as a result of either climate change or mining, could bring threats to human health.
The ancient virus, named Pithovirus sibericum, infects amoebas, not humans or animals.
It survived in the Siberian ice from a period when woolly mammoths and saber-tooth cats roamed the earth.
The scientists found it in the Chukotka Autonomous Region, the most northeasterly region of Russia, which lies across the Bering Strait from Alaska.
Its discovery was reported by the researchers, from French and Russian institutions, in an article published this week by the U.S. Proceedings of the National Academy of Sciences.

Reemergence
The discovery of Pithovirus "shows how incomplete our understanding of microscopic biodiversity is when it comes to exploring new environments," France's National Center for Scientific Research (CNRS) said.
And the potentially bad news: the reemergence of other viruses "is no longer the domain of science fiction," the center said.
These include viruses that were long considered eradicated, such as smallpox, whose replication process is similar to that of Pithovirus, according to the scientists.
"This is an indication that viruses pathogenic for human or animals might also be preserved in old permafrost layers, including some that have caused planet-wide epidemics in the past," said Jean-Michel Claverie, one of the study's co-authors.

Far more genes
Scientists were previously aware of two distinct families of giant viruses, Megaviridae and Pandoraviridae. This latest discovery establishes the existence of a third family.
Giant viruses contain far more genes than common viruses.
Pithovirus has about 500 genes, dwarfing viruses like those that cause AIDS or influenza, which contain about 10 genes, according to Claverie.
But Pithovirus is in turn comfortably eclipsed by a previously discovered giant virus, Pandoravirus, which contains roughly 2,500 genes.
Share:
Newer Post Older Post