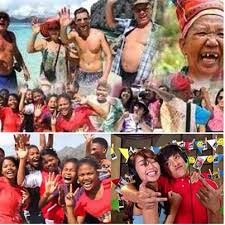 ABS-CBN intended the song to be festive; and being dedicated to all Filipino people, who stayed strong and happy despite the recent calamities that shattered the country. This will also to show that the country's natural resources and tourist spots are still there, recovered, kicking and inviting despite all the havocs they faced.

The official music video of the station ID – dubbed as "Masayang Muli ang Kwento ng Summer Natin" – will be released on ASAP 19 this Sunday, March 30, 2014. Usually, it is expected to feature some of the biggest, trending and most sought-after Kapamilya stars of this generation – that will make your summer even more hotter! So stay tuned!

Catch the video and lyrics of #PINASmile below, as rendered by Daniel Padilla (DJP) and Kathryn Bernardo (KB), also commonly known as the "KathNiel" loveteam. It was relatively catchy, so be ready to get hooked!