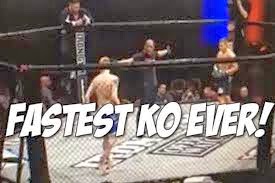 Our friends at CagePotato brought a nasty, and nasty-quick, fight from the UK to our attention today. The WCMMA 14 fight between Mike Garret and Sam Heron Saturday night in London (video above) very well may have ended quicker than any other MMA fight on record. Check out the time at the bottom right of the screen for yourself.
From the time the referee began the fight to the time Heron was knocked out, cold, with a head kick, just 1.13 seconds elapsed. That will likely not be the official time listed for the ending, however, because it nearly took more time (understandably) for the referee to run in and officially wave off the fight as it did for the fight itself to take place.
Have you ever seen a faster ending than this nearly "one-second KO" in MMA? Let us know in the comments section.