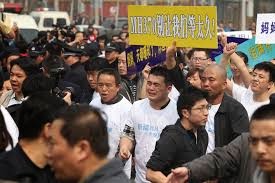 More than 300 relatives and friends of missing Flight MH370 passengers marched to the Malaysian Embassy in Beijing Tuesday to express their anger and frustration with Malaysian authorities.

Hundreds of uniformed police blocked media from joining the protesters as they approached the gates of the embassy.
Relatives despair as weather delays Flight 370 search
Many protesters wore white t-shirts that read, "Please pray for the passengers of MH370. We pray for their safe return."
Some carried signs with messages of frustration and grief. "Malaysian government, tell the truth. We've been waiting too long," read one. "Husband, please come home," said another.

Bad weather hampers missing plane search
Overcome by stress and raw emotion, one woman was carried out from the cordoned area on a stretcher by paramedics.
Petition letter
Earlier, the protesters had walked on foot from the Lido Hotel, near Beijing's International Airport, after police prevented them from boarding buses to the embassy. Many relatives have been staying at the hotel since the airliner vanished more than two weeks ago.
The protesters left the embassy on buses on Tuesday afternoon after a Malaysian official accepted a petition letter from the families.
The previous evening, Malaysia's prime minister announced that Flight MH370's last position was in a remote part of the Indian Ocean. Soon after, Malaysian Airlines informed relatives that the lives of all on board the plane had been lost. Relatives at the Lido Hotel screamed and sobbed after hearing the news.
The airline has already given family members $5,000 in compensation for each passenger aboard the ill-fated flight, and is preparing to make additional payments as the search continues.
"No amount of compensation or consolation will make up for any loss of life," Malaysia Airlines Chairman Mohamad Nor Yusof said Tuesday.
The company is working on an arrangement to fly families to Australia once wreckage is found.
Visa fees will be waived for the families of MH370 passengers and crew flying in to Australia, the country's defense minister David Johnston said Tuesday.
Texts criticism
Malaysia Airlines has defended its decision to inform the families by text message -- along with phone calls and face-to-face meetings -- that the flight ended in the Indian Ocean.
The airline's CEO, Ahmad Jauhari Yahya, said Tuesday that text messages were used to ensure the nearly 1,000 family members "heard the tragic news before the world did."
China has asked Malaysia to share any evidence that led it to conclude the airliner crashed in the Indian Ocean with no survivors.
Share:
Newer Post Older Post