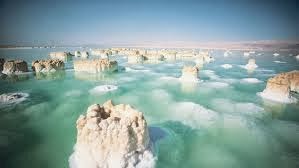 We all know Antarctica is cold, but did you know it is also salty? Don Juan Pond in Antarctica is considered by scientists to be the saltiest body of water on the planet. Named after two Navy officers who studied it in the 1960s, Don Juan Pond is about 40% salt. The oceans, in contrast, have an average salt content just over 3%. So where does all that salt come from? Salty Antarctic soil actually sucks water out of the atmosphere, creating brine, which mixes with freshwater runoff from melting snow to make the pond. The salt in the oceans comes from rain, rivers and streams that pass over rocks containing salts and then empty into the sea. Undersea volcanoes and hydrothermal vents add additional salt. But the Dead Sea owes its high salinity to hot temperatures. Located between Jordan and Israel, the landlocked sea is the lowest geographical point on land, about 1,300 feet below sea level. Incoming water from the Jordan River and other tributaries evaporates quickly, leaving the remaining water with a high salt content around 33%. The name Dead Sea refers to the fact that the salty water is unfit for most marine life. The largest saltwater lake in America is Great Salt Lake in Utah, which is larger in surface area than the state of Rhode Island. The south part of the landlocked lake receives most of river inflow and has a salinity around 11%, but in other sections the salinity is closer to 28%. That’s less salty than Don Juan Pond but still way above drinkable water, which is 0.05% salt or below.
Share:
Newer Post Older Post