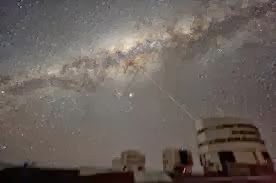 Australian scientists have dated a star thought to be the oldest yet discovered, and it's right in our neighborhood -- astronomically speaking.

The star, which has been given the name SMSS J031300.36-670839.3, is thought by a team of astronomers at the Australia National University to be 13.6 billion years old.
The star itself is not a new discovery -- it is faintly visible on existing photographic maps of the southern sky. But the recent dating places it as older than any other celestial body previously found.
The star is part of our Milky Way galaxy and only around 6,000 light years from Earth, relatively close in astronomical terms.
Stefan Keller, a research fellow at ANU's Research School of Astronomy and Astrophysics, published the findings in the scientific journal Nature.
"Stars act as time capsules," Keller told CNN. "This one took a little sample of the universe at the time that is was formed ... and means we can study [what the early universe was like] in great detail."
The discovery of the star's age -- which dates it at only a hundred million years younger than scientific estimates of the age of the universe itself -- is significantly older than any previously dated stars. The oldest celestial bodies discovered thus far have been 13.2 billion years old.
Keller and his team used the SkyMapper telescope to find ancient stars as part of an ongoing project to produce the first digital map of the southern sky.
The team used a technique for imaging stars to ascertain how much iron was present -- the younger a star, the greater the amounts of iron it had. The SkyMapper telescope is unique in its ability to find stars with low iron, which uses sophisticated filters to measure the color of the stars, a key indicator of iron levels.
"The stars we are finding number one in a million," said team member Mike Bessell on the University's website.
The team looked at 60 million stars and narrowed down potential candidates to a shortlist of 200, which were examined using the Magellan telescope in Chile.
It is an important cosmological discovery, as it tells researchers a great deal about the origin of the elements that make up the universe.
Keller said that most stars created in the early stages of the universe died in "extremely violent explosions," and that it is unlikely that more stars of a similar age will be found.
Share:
Newer Post Older Post