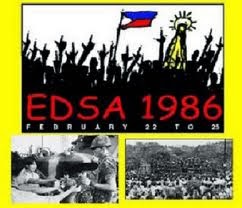 The People Power Revolution (also known as the EDSA Revolution, the Philippine Revolution of 1986, and the Yellow Revolution) was a series of popular demonstrations in the Philippines that began in 1983 and culminated in 1986. The methods used amounted to a sustained campaign of civil resistance against regime violence and electoral fraud. This case of nonviolent revolution led to the departure of President Ferdinand Marcos and the restoration of the country's democracy. It is also referred to as the Yellow Revolution due to the presence of yellow ribbons during the demonstrations following the assassination of Benigno Aquino, Jr.. It was widely seen as a victory of the people against the 20-year running authoritarian, repressive regime of then president Ferdinand Marcos and made news headlines as "the revolution that surprised the world".
The majority of the demonstrations took place on a long stretch of Epifanio de los Santos Avenue, more commonly known by its acronym EDSA, in Metropolitan Manila from February 22–25, 1986 and involved over two million Filipino civilians as well as several political, military, and including religious groups led by Cardinal Jaime Sin, the Archbishop of Manila. The protests, fueled by the resistance and opposition from years of corrupt governance by Marcos, culminated with the departure of the dictator from Malacañan Palace to the United States state of Hawaii. Corazon Aquino was proclaimed as the legitimate President of the Philippines after the revolution.

President Ferdinand Marcos
Ferdinand Marcos was elected president in 1965, defeating incumbent Diosdado Macapagal by a very slim margin. During this time, Marcos was very active in the initiation of public works projects and the intensification of tax collections. Marcos and his government claimed that they "built more roads than all his predecessors combined, and more schools than any previous administration". Amidst charges of vote buying and a fraudulent election, Marcos was reelected in 1969, this time defeating Sergio Osmeña Jr.
Marcos's second term for the presidency, however, was marred by allegations of widespread graft and corruption. The increasing disparity of wealth between the very wealthy and the very poor which made up the majority of the country's population led to the rise of crime and civil unrest around the country. These factors, including the formation of the New People's Army, an armed revolt that called for the redistribution of wealth and land reform in the Philippines, and a bloody Muslim separatist movement in the southern island of Mindanao led by the Moro National Liberation Front, contributed to the rapid rise of civil discontent and unrest in the Philippines.
Marcos was barred from running for a third term as president in 1973, so on September 23, 1972, by virtue of a presidential proclamation (No. 1081), he declared martial law, citing rising civil disobedience as justification. Through this decree, Marcos seized emergency powers giving him full control of the Philippine military and the authority to suppress the freedom of speech, the freedom of the press, and many other civil liberties. Marcos also dissolved the Philippine Congress and shut down media establishments critical of the Marcos government. Marcos also ordered the immediate arrest of his political opponents and critics. Among those arrested were Senate President Jovito Salonga, Senator Jose Diokno, and Senator Benigno Aquino Jr., the staunchest of his critics and the man who was groomed by the opposition to succeed Marcos after the 1973 elections. Marcos would also abolish the Philippines' 1935 constitution and replace it with a parliamentary-style government (the Batasang Pambansa) along with a new constitution written by him. With practically all of his political opponents arrested and in exile, Marcos' pre-emptive declaration of martial law in 1972, and the ratification of his new constitution through political coercion, enabled him to effectively legitimize his government and hold on to power for another 14 years beyond his first two terms as president. At a period when the Cold War was still a political reality, Marcos's dictatorship ensured the political support of the United States by Marcos' promise to stamp out communism in the Philippines and by assuring the United States of its continued use of military and naval bases in the Philippines.
Throughout his presidency, Ferdinand Marcos had set up a regime in the Philippines that would give him ultimate power over the military and the national treasury, as well as set up a personality cult. Following his declaration of martial law on September 21, 1972, Marcos immediately began to embezzle money from the government and order the military to kill any political competition against him. As a result, the Philippine economy began to tumble greatly, and the nation lost its competitive edge in Southeast Asia. He also ordered many stores, hotels, schools, universities, and other public places to place his Presidential picture prominently or otherwise their facilities were shut down. The media frequently "eulogized" Marcos through public service announcements and news reports. Even billboard advertisements across the country were replaced with his propaganda messages on justifying his regime's actions. Marcos also ordered the shutdown and takeovers of businesses in the country, then put these businesses either under the government control, or under the control of Marcos cronies.
Several groups of people, however, even within the government, conspired throughout the term of the Marcos regime to overthrow him. They were led by the popular public figure, incarcerated opposition senator Benigno "Ninoy" Aquino Jr, who Marcos accused of leaning to a left-wing solution. While gaining popularity amongst the Filipino people for his stance against Marcos, Aquino was eventually forced to seek exile in the United States for health and safety reasons. However, in 1983, Ninoy Aquino announced his plans to return to the Philippines to challenge the Marcos government.
Within the military, disillusioned junior officers silently conveyed their grievances. This led to the formation of the Reform the Armed Forces Movement (RAM), Soldier of the Filipino People (SFP), and Young Officers Union (YOU). RAM, which was led by graduates of the Philippine Military Academy Class of '71, Lt. Col. Gringo Honasan, Lt. Col. Victor Batac, and Lt. Col. Eduardo Kapunan, found an ally and mentor in the Defense Minister Juan Ponce Enrile.